The management of Opeans Nigeria Limited Dr. Ben Nwoye operators of Opeans Safety Training Centre at Opete near Warri in Udu Local Government Area of Delta State has debunked the alleged sealing of its Warri training centre by operatives of the Economic and Financial Crimes Commission (EFCC).

Nwoye said, though some staff of the company were arrested to EFCC Zonal Office in Benin over a petition alleging that the company was issuing International Association of Drilling Contractors (IADC) certificates without approval.

Dr. Ben Nwoye described the allegation against the company as frivolous and lacks any iota of truth, explaining that the company’s staff arrested by operatives of the anti-graft agency have been released.

He also stated that the company was fully authorised and certified for operations by DPR and other safety regulating agencies. He added that the company had never been involved in any form of fraudulent practices since its existence.

Nwoye, who is the chairman of the Enugu State chapter of the All Progressives Congress (APC), accused the Managing Director of Lym Consults Nigeria Limited, Mr. Larry Otu of writing the petition against his company with intent to monopolize safety training in Warri.

But, the Managing Director of Lym Consults Nigeria Limited, Mr. Larry Otu when contacted said that he would not have joined issues with a person like Benjamin Obi Nwoye who had been disbarred from practicing law by the Supreme Court of Illinois, US due all to all form of sharp practices.

He said;  “However, the issues raised by Ben Nwoye should be addressed. That, on the 30th of January, 2018 when the Police from Force Headquarters in Asaba invited him  due to a petition Benjamin Nwoye wrote alleging attempt to kidnap and threat to life that he honoured the invitation. That, after the interview/meeting with the Police, which Ben Nwoye was part of, the Police asked Ben Nwoye to produce the text messages and his phone for forensic analysis if there was actually any attempt by me  to kidnap him. That Ben Nwoye ran away. Till   this day, Ben Nwoye has never returned to the Police to produce any evidence, or his phone for analysis by the Police.  Ben Nwoye was only trying to use the Police to intimidate him because he was working so hard at that time to get my  company,  Lym Consults Nigeria Limited OPITO approved.  Ben Nwoye who had been in the training business since 1988 could not imagine that a young company like us was heading for global certification”.

He disclosed that he has asked his lawyers to petition the Nigeria Police Force to investigate false information provided to them (the Police) by Ben Nwoye, adding that his legal team has commenced a 500 million Naira lawsuit against Ben Nwoye for defamation of character.

According to him; “We all know the position of President Buhari and the current leadership of the EFCC on corruption. That issues bothering on corruption and fraud are not handled with kids glove. If  Ben Nwoye and Opeans Nigeria Limited truly have IADC Accreditation to offer BOSIET, HUET and SAS trainings, which they have been doing for years, they should not be crying on the pages of newspaper or social media. But, they should simply display their ‘IADC Accreditation’ for all to see”.

“Let me make it firm to Ben Nwoye that he cannot intimidate me with his position as the Chairman of APC in Enugu State. I cannot even address him as Doctor, because I know if I challenged him to produce his PhD certificate, he might not be able to. I will only address him as Doctor Ben Nwoye when I see and verify his PhD certificate. Ben Nwoye was disbarred from practicing law by the Supreme Court of Illinois in the US, ask him why? That is why it has being difficult for someone like me to joined issues with such character”.

The accusation that an employee of Shell died at Lym Consults Nigeria Limited Training Center is a lie, and totally misleading. No employee of Shell or its contractor has never died during training sessions with us. Lym Consults Nigeria Limited has subjected its entire training systems to global standard, hence we are the only OPITO Approved training Center in Delta State. OPITO Approved certificates issued at Lym Consults’ Training Center are accepted in the global Oil and Gas Industry, because OPITO is the Industry-owned global standard for training and skills. OPITO Standards are put together by the entire global Oil and Gas Industry. ”Instead of Ben Nwoye and his Company Opeans Nigeria Limited to follow the path of hardworking Companies in the Nigeria Oil and Gas industry who have invested in the necessary infrastructure and human capital to achieve global certifications for training and skills, they have chosen the path of certificate forgery. Thereby, compromising the safety of workers in the Nigeria Oil and Gas Industry. 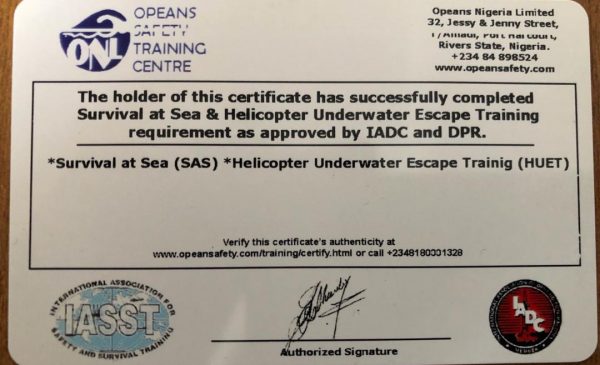 “News men, if I said any of you are not a licensed journalist, what are you supposed to do? I think the proper thing to do would be to bring out your license for all to see, right?” Okay, I have said firmly based on information directly from IADC to all the training providers in Nigeria, including the DPR, that Opeans Nigeria Limited is not an IADC Accredited Training Provider, but they have been issuing fake and forged ‘IADC Approved’ certificates to Oil and Gas workers. So, tell Ben Nwoye and his company Opeans Nigeria Limited to flag their IADC Approval or Certificate. If they cannot, then they have to face the law for illegally issuing certificates that they do not possess the right to award and obtaining money under false pretense.

Lym Consults Nigeria Limited is an OPITO Approved Training Provider, you can verify this directly from the OPITO website www.opito.com/training/training-provider-network 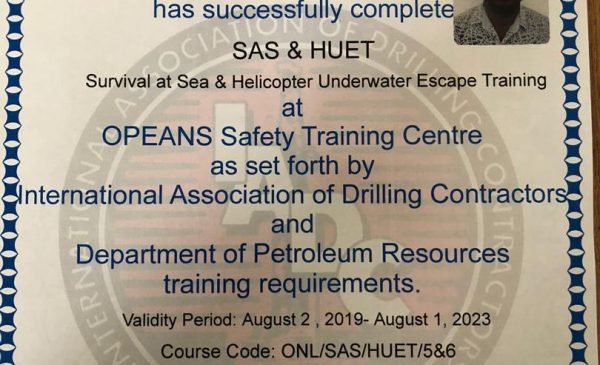