Traditional Rulers and leaders from oil producing communities of Delta State have pointed out a development plan for the management of the Delta State Oil Producing Area Development Commission, DESOPADEC.

The commission, led by its Managing Director and Chief Executive Officer, Chief Askia Ogieh alongside other executives of the board, met with the various monarchs drawn from Ijaw, Urhobo, Isoko, Ndokwa and Itsekiri ethnic nations during a series of parley with them at the DESOPADEC town hall meetings.

Starting with the Isoko nation at the Isoko House, Oleh, President General of the Isoko Development Union, IDU, Chief Iduh Amadhe, harped on the needs of his people, particularly indigenous contractors from Isoko, some of whose payments he said were lagging after execution of the commission’s projects.

While commending the DESOPADEC board for its new approach in meeting with the task of the commission, in line with the policy of the Governor Ifeanyi Okowa’s administration, Chief Iduh stated that the bottom-to-top approach if implemented, will be a turnaround in the future mandate of the commission.

He harped on the need for the review of some old projects initiated by the commission that did not meet up engineering standards, as well as the requirements and adequate budgeting for ongoing or inherited projects against the previous system of concentrating on new projects while completion of ongoing projects were not accommodated in financial outlays.

“Please permit me to herein highlight some areas which I think you should also keep in view, as you forge ahead in your onerous task. In line with the law setting up the commission, the allocation of projects, employment, scholarships and micro-credits should as much as possible be based on production quota. 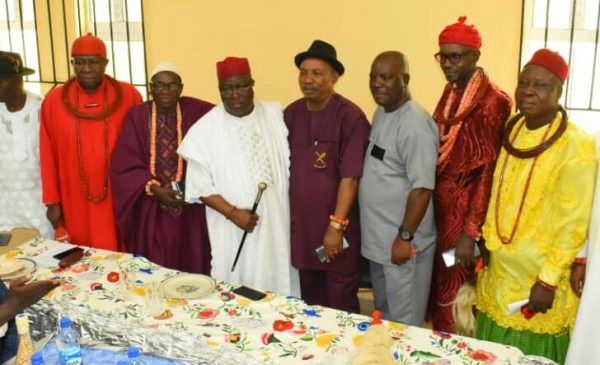 “I must place on record that we acknowledge and appreciate the new bottom to top approach system being adopted by the board as a wonderful initiative that is bound to bring a sharp turnaround in the fortunes of mandate areas.

“It is my fervent belief that if well executed, the new approach will not only bring about the desired results, but will remain a potent factor in achieving the set goals.

Continuing, he said, “I also wish to commend the new approach to attending to payments payable contractors. I urge you to keep this up as it is confidence building and a possible spur for greater performance, as well as quality service delivery.”

At the stakeholders meeting with the Ijaw nation, the Pere of Ogulagha kingdom, HRH Joseph Timiyan who spoke on behalf of the monarchs, said: “We have not experienced this before now. I know this is a corrective measure that the governor wants to carry out and I want to also say that the board members should not disappoint our governor, because he has a very good mind and initiative for the people that he is governing.

“DESOPADEC is meant to be a board that is supposed to put smiles on the faces of people of the oil producing areas, but I believe that this present board will do something different because the starting point is so good.”

“So when we talk of projects, we must also talk of employment. If project is going to come from the grassroots of the actual producing communities or impacted communities, let employment also come from them alongside empowerment such as giving money to people to either trade or obtain skill acquisition.

“I thank God that the MD is here, Project Director is here, Finance is here and other board members are all here. This is the complete board. Please, I want you people to put all things in consideration and not only to think of projects. Project alone cannot give us the needed happiness but other things will add to the happiness, so that peace will reign in our Ijaw land and also in other lands.”

At the town hall meeting for the Itsekiri ethnic nation with the theme, “The Itsekiri Nation at a Developmental Crossroad: The Way Forward,” the board was tasked on the importance of sponsoring indigenes from oil bearing communities who are interested in pursuing their Masters and Doctor in Philosophy degrees with scholarships.

In his paper presentation, the guest speaker at the event, Prof. Lucky Akaruese of the Department of Sociology, University of Portharcourt, charged the board through the commissioner representing the Itsekiri nation, Giftson Omatsuli, to invest more of funds meant for the Itsekiri nation on education.

While going down memory lane on the educational challenges of the Itsekiris, he noted that contrary to what was witnessed in the 1920s when Itsekiris were ahead of other ethnic groups in Nigeria in various educational disciplines, the reverse is the case today.

In their remarks at the town hall meeting for the Urhobo nation, the Owhorode of Olomu kingdom, HRM Ogbon Ogoni Oghoro I; Okobaro of Ughievwien Kingdom, HRH Mathew Egbi, Owawha II; Ovie of Udu kingdom, HRH E.B.O Delekpe, Owhoru I; Ovie of Ughelli kingdom, HRM Oharisi III and a host of other Urhobo monarchs, also gave suggestions for development to the DESOPADEC board.

“We are embarking on a paradigm shift from the old DESOPADEC and we will ensure that all ‘abandoned projects’ will be completed.”

Responding to the suggestions by the traditional leaders at the various fora, DESOPADEC Managing Director, Chief Askia Ogieh, reechoed that the commission is embarking on a new approach, in line with the renewed mandate by the state governor, Dr. Ifeanyi Okowa

At the town hall meeting for the Urhobo nation, the DESOPADEC boss while assuring the people that there is nothing like “abandoned projects” in the commission, said that the current board will be setting aside 60 percent of funds in its budget for the completion of such ongoing projects.

He said: “We are in the process of putting together our budget, and we are having a departure of what used to be, following the directive by the governor, Dr. Ifeanyi Okowa on the need for a bottom-to-top approach.

“We are here to redirect our focus to ensure we build projects that will touch our lives and make the people see the projects as their own. You call them abandoned projects but we call them ongoing projects and we will be setting aside 60 percent of funds in the next budget to the see to the completion of these projects.

The remaining 40 percent will be for projects that will be collated from interactions, as a result of these town hall meetings which will be shared according to the quantum of the various oil producing ethnicities.”

On his vision for the commission, Askia during an interactive session with staff of the commission at a 3-day in-house training session organised for staff of the Department of Investment and Industrial Promotion, said: “My mission and vision is to re-brand DESOPADEC and positively affect the lives of the people in the mandate areas of the commission.”

He said, “We are going to do things differently from the old ways. We need to have a new DESOPADEC that will affect the lives of our people positively and I promise you that the department of Investment and Industrial Promotions will play a major role in my human capital development plan, which is aimed at pulling our people out poverty.”

On the essence of the town hall meetings, the DESOPADEC boss explained that it was aimed at changing the way and manner projects were being executed under the commission.

He said: “We have decided to have a change in the way and manner things are being done in the commission, particularly in the area of project execution.

“We discovered before now that projects were cited, based on our (commission’s) own wisdom and not on immediate importance to the people. We want to bridge that gap and that is why we are here to hear from the people and know what they want.

“I choose to personally be present at the meetings, to hear from the people and to get their inputs on the budget which will be drawn, based on the 27 percent accrued to the Ijaw ethnic nation.”

Placing their ideas for a sustainable developmental plan in what has been termed as a re-branded DESOPADEC, the monarchs and ethnic leaders have indeed thrown their hat in the ring for a viable partnership that will enthrone development for the oil bearing communities of Delta State.