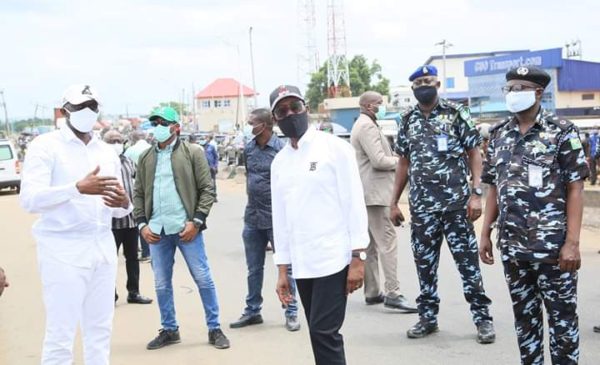 Delta Governor, Sen. (Dr) Ifeanyi Okowa, on Saturday warned that unauthorized vehicles entering the state in violation of restriction in inter-state movement ordered by President Muhammadu Buhari to stem spread of COVID-19 around the country would be impounded.

Besides, the governor, who gave the warning while monitoring compliance of the order at some boundaries between Delta and neighbouring states, said that operators of such vehicles risked prosecution.

He told newsmen after monitoring situations at Niger Bridge boundary between Delta and Anambra and at Alifikede, the boundary community between the state and Edo on the Benin-Asaba highway, that he was satisfied with the level of compliance with the regulation.

Okowa reminded security agents and members of the state’s Task Force at the boundaries that only vehicles carrying agricultural products and those on essential duties should be allowed into the state.

He restated the state government’s seriousness at implementing the inter-state lockdown order, saying that he was aware that some persons were being moved from one part of the country to the other.

He charged the security operatives and members of the task force to be vigilant so as to detect unauthorized movements and stop them from gaining entrance into the state.

The governor said: “we have gone round to see the work the Committee and some of our youths are doing in enforcing the inter-state lockdown to ensure that it is being done properly the way it ought to be done.

“There are certain protocols that have been allowed; inter-state movement of goods and services has been restricted to agricultural products and in that respect, only such vehicles are supposed to be moving from one state to another.

“But, most Nigerians will always want to do whatever they wished; so, we have had to ensure that our 13 boundaries with other states are well secured.

“We have various security agencies at every boundary and we have decided to add to them our community youths to help ensure that the processes set in place allow only those who are permitted by the order of the President or by the order of the state government to go through the state.

“Every other vehicle is supposed to be turned back. We have come out today at the Head Bridge and the junction between Edo and Delta at the Alifikede boundaries.

“A lot of work is being done by the task force set up in these two places and I am hopeful that this is same thing going on in the other eleven places.

“The reason behind the inter-state lockdown is because we want to limit the number of persons moving across states so that we try as much as possible to limit the spread of the Coronavirus.

“The numbers are already going up in Nigeria and there is the need for us to limit the spread and that’s the reason for the inter-state lockdown in terms of movement and I believe that it has been achieved at both sites that we visited today.”

The governor commended the officials at the boundaries for their efforts at controlling movement at the boundary points and urged them to do more as the fight against COVID-19 needed the input of all.

On the observed free movement of people from Asaba to Onitsha and others from Onitsha into Asaba on foot and motorcycles, he urged the security agencies and task force members to do more to avoid more cases of infection by COVID-19 due to unregulated movements.

Okowa stressed the need for residents of the state to sustain the use of face mask, saying that it would help to reduce the level of infection.

He affirmed that anyone caught without face mask in a public place would be quarantined in an isolation centre.

He called on well-spirited Nigerians to assist the state government in the provision of more face masks for the people as government could not do it alone.

The governor also reiterated the call on residents to practise physical distancing, regular wearing of face mask, routine washing of hands with running water and soap or use alcohol-based hand sanitizer, and other precautionary measures that would keep the pandemic at bay.

He dismissed reports of alleged influx of almajiris into the state, adding that the taskforce had been directed to check every vehicle coming into the state.

“We have given instructions to those manning the boundaries to ensure that every vehicle is checked and anyone carrying more than the authorised number of passengers, especially the motor boy and the driver should be turned back.

“Only the driver and possibly two other persons should be inside such vehicles conveying approved goods into the state.

“Any number beyond that should be turned back and I can see that they have been doing that and I haven’t been briefed of the influx of almajiris into the state,” he explained.