Councillors from the  Isoko South Legislative Arm, Isoko South Local Government Area of Delta State, recently shut down the council’s secretariat in Oleh to protest against an alleged borrowing of N15 million by the local government Chairman, Mr. Victor Asasa, and his poor administrative style.

The Councillors who could not boldly protest against the Rivers state based chairman of Isoko South hired and  mobilized youths, to besieged the gate of the Local Government Council at the early hours of Thursday, 28 July 2022.

Armed with placards with various inscriptions such as, “We say no to borrowing without approval by Legislators, Asasa should stop running the Council as his own personal business, ‘Asasa is not fit for the post of a Council chairman, Mike Evivie is not Isoko South Local Government Chairman, if he wants to be Chairman let him resign, ‘Asasa should be probe for diverting IGR into his private account’, among others.

Some of the councilors, that spoke on anonymous condition, revealed that Mr Asasa allegedly operates his office from Rivers state

“For several months, the Council office is based in Port Harcourt and it would interest the public to know that he has not set his foot on the council more than four times this year.

“The Council chairman, Hon Victor Asasa is autocratic in his leadership, the 2022 budget is not yet approved but he is spending the money”.

“Some time ago, he (Hon Victor Asasa) did Solar power in the Council that the cost of running diesel is too much while he is spending over N11 M on diesel to power the council. 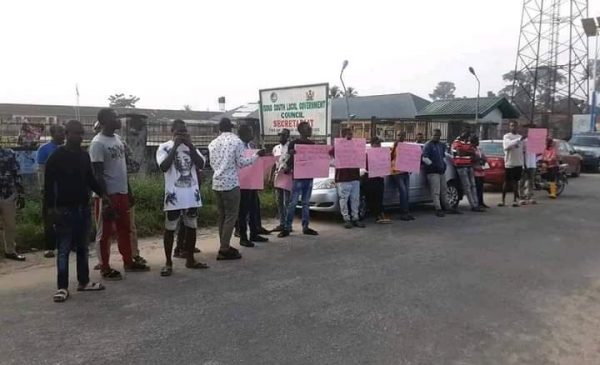 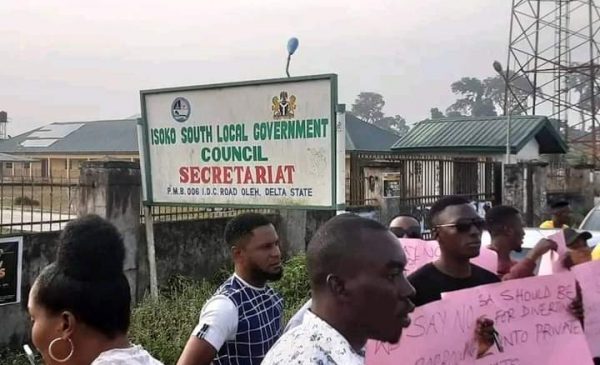 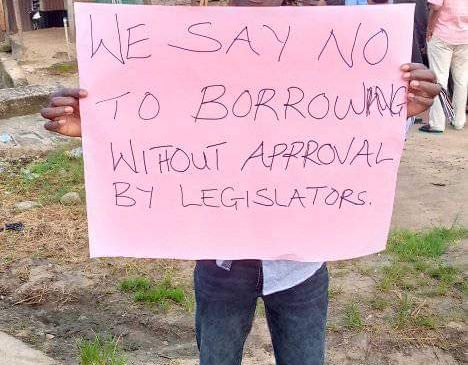 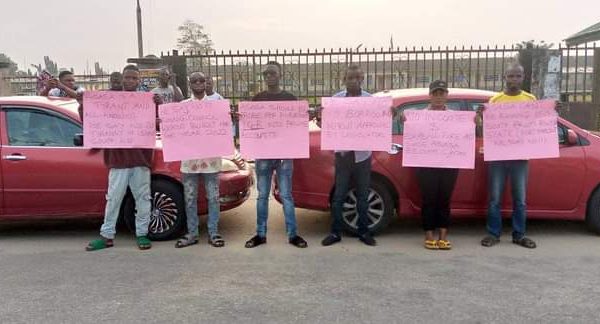 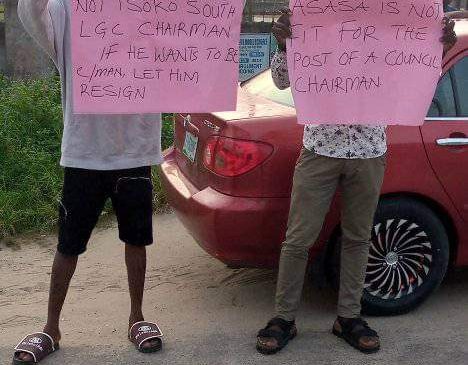 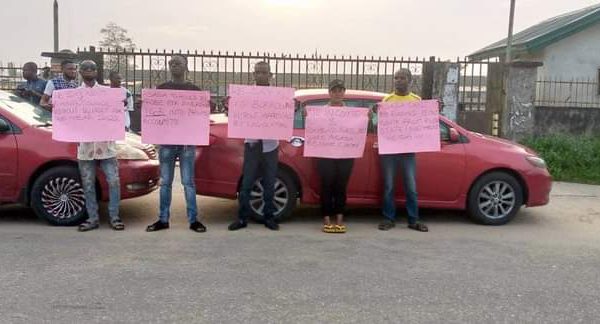 And for more than 7months now that he has done the Solar power in the Council, he has not remit the 11milion naira he was supposed to be paying for the diesel. ”

The monthly impress of Mike Evivie that ought to be N50,000 has been increased to N300, 000 without due process while councilors are running their affairs without impress.

Below is the video of  protesters hired by Isoko South Councilors

“He supposed to hold meeting with the councillors on some developmental issues affecting the Council. But you cannot see him to discuss these issues. He is autocratic, anything he says stands.”

The councilors further alleged that   “When money comes, they will carry the salary wage bill to him at Port Harcourt. He will sign it there without coming  to office.

The chairman’s lodge is there but he does not stay there. ”

“When you call him, he will say he is sick but when money comes, he will sign documents and money will be transferred into his account.”

“He recently borrowed another N 5M, which the HPM and council Treasurer signed for him. It was when the money was bringing problem that the Treasurer cried out that, money came into the Local Government account but the Chairman don’t want to refund the money they borrowed on his behalf.

“When the last allocation came, the Treasurer to the Local Government confronted him that they should refund N 2 million and he refused.

“This made the Treasurer not to sign one of  cheques, since Asasa refused to refund part payment of two million naira in from what they borrowed.

“Asasa summoned the Treasurer to the Chairman Local Government Civil Service Commission alleging that the treasury is fighting him.

“Those are some of the reasons why we the Councillors protested.” The Source stated”.

Efforts to speak with the Isoko South council chairman, Mr Asasa Victor over the allegations were not successful as his mobile line was switched off

But the leader of the legislative Arm , Mr Othuke Arova said, “It is an internal issue.”