A memorial symposium and day of tributes has been scheduled to hold in honour of the late distinguished social scientist, Professor Peter Ekeh who died in the United States of America in November 2020 at the age of eighty-three. The symposium will hold on Wednesday 24th March 2020 at the Urhobo House in Uvwiamuge-Agbarho after Warri in Delta State.

The event which will kick off at 10am has Professor Eghosa Osaghae, eminent political scientist, a former student of Professor Ekeh and former Vice Chancellor of the Igbinedion University, Okada, as guest speaker. Professor Osaghae of the Department of Political Science at the University of Ibadan will be speaking on the topic “Social Reality, Statehood and Citizenship in Africa through the Lens of Peter Ekeh”.

The symposium will feature a panel of discussants made up of erudite academics namely: Professor Abednego Ekoko, Professor G. G. Darah, Professor Sunny Akpotor and Dr. Emmanuel Mordi. The discussion will be moderated by Mr. Abraham Ogbodo, a former editor of The Guardian. The event will also feature tributes to Professor Ekeh and a documentary on his life and times. 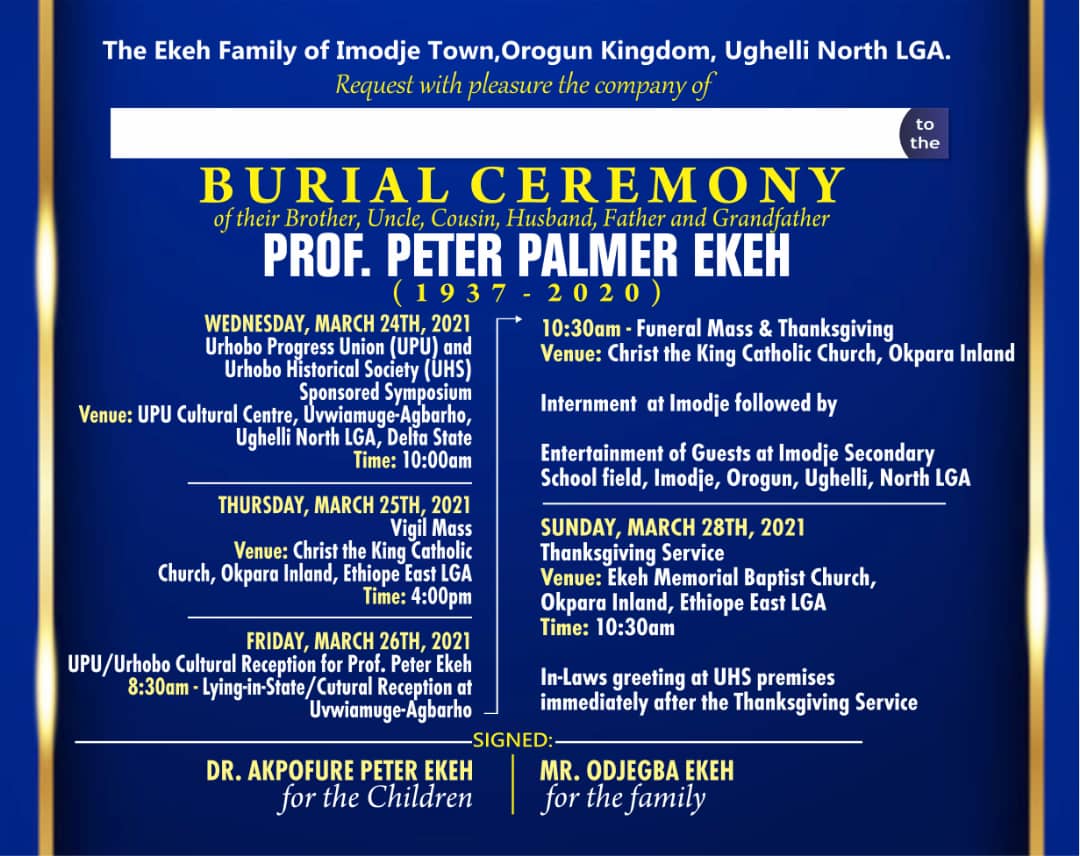 The occasion which will be chaired by Professor Sam Oyovbaire has Chief Johnson Barovbe as special guest of honour while Dr. Aruegodore Oyiborhoro, President of the Urhobo Historical Society (UHS), and Olorogun Moses Taiga, President-General of the Urhobo Progress Union (UPU) are co-hosts.

Meanwhile the remains of Professor Ekeh will be committed to mother earth in his native Imodje-Orogun on Friday 26th March after a funeral service at Christ the King Catholic Church in Okpara inland. A service of songs will hold a day earlier on the 25th while an outing service scheduled for Ekeh Memorial Baptist Church will take place on Sunday 28th March to be followed the same day by in-laws greetings at UHS headquarters also in Okpara in-land.