Nurses under the aegis of University Graduates of Nursing Science Association (UGONSA) have raised alarm to the continued incarceration of their members over the alleged murder of former Head of Nursing Services, Federal Neuropsychiatric Hospital (FNHE), Enugu, Dr. Mrs. Maria Amadi.

UGONSA noted with dismay that despite glaring evidence that showed that they had no hand in the death of the woman, especially as the armed robbers who robbed and shot the deceased in the course of robbery have not only confessed to the crime but also recreated how they carried out the operation to the police and charged to court; yet UGONSA members are still kept in detention.

In a statement by the National President of the Association, Chief (Hon). S.E.O. Egwene, and Acting National Secretary, Nurse P.O. Eteng, the Association said it does not want to believe the story making rounds that “they are still in detention because Governor Ugwuanyi had influenced the Enugu State judiciary to deploy ‘judicial filibuster’ to keep them perpetually incarcerated”.

UGONSA said, “We are simply begging the Governor to release these innocent employees of the FNHE to their families having incarcerated them unjustly for 18 months now for a crime they never committed. 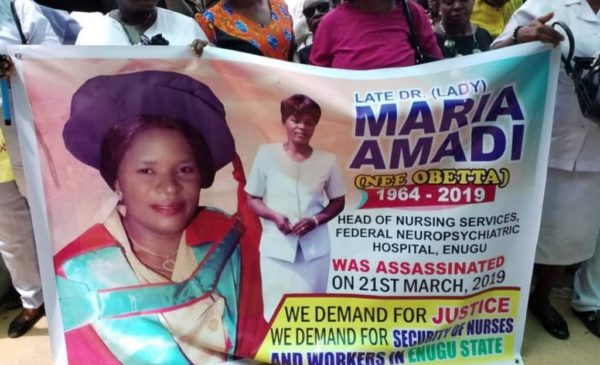 Recall that Late Nurse Maria Amadi was allegedly shot dead on Thursday, March 21, 2019, at Federal Housing Estate, Trans-Ekulu, Enugu and the incident led to the arrest and subsequent detention, the next day, of three of her colleagues at the Hospital, namely, Mrs. Buzo-Maduka Ruth, Mr. Afam Ndu and Mrs. Achalla Stella, on the allegation that she said before her demise that she suspects people she does not get along with in her place of work to be behind the incident.

While Mrs. Buzo-Maduka Ruth and Mr. Afam Ndu (who are nurses and members of UGONSA) are respectively the Principal and Vice-Principal of the School of Post-Basic Psychiatric and Mental Health Nursing of the FNHE (School of Nursing), Mrs. Achalla Stella is a Principal Confidential Secretary in the Hospital.

The statement read, “We showed remarkable equanimity when our members were unjustly and hurriedly clamped into detention without any shred of evidence over the unfortunate murder of Late Nurse Maria Amadi. Because we were interested in getting real justice for the deceased and the entire nursing community we went all the way in urging those with useful information regarding the gruesome murder of the late nurse to come forth with such”.

“Fortunately, someone who had useful information, as per who the real culprits are, in the person of Evangelist Tochukwu Obiorah (alias Iko No) approached the association. Evangelist Tochukwu Obiorah is not an ordinary person in the Enugu State Security circle. As at the time of the unfortunate incident of the murder of Late Nurse Maria Amadi till now, he is the Assistant State Commander of Enugu State Neighborhood Watch”.

“The useful information provided by Evangelist Tochukwu Obiora led us to petition the Inspector General of police to launch a comprehensive investigation into the matter. A fresh investigation carried out by the Federal Anti-Robbery Squad, Force Criminal Investigation Department, Abuja, led to the arrest of three suspected armed robbers that carried out the attack, namely, Chidiebere Ochi, Amandi Ekwo and Uchenna Onuora. The suspects did not only confessed to killing Dr. Mrs. Amadi in the course of robbing her but also recreated for the police how the incident happened.”

“Instructively, the killer armed robbers also made it very clear that nobody contracted them to kill Dr. Amadi and that they do not know any of the FNHE employees who were unjustly accused and arrested over the death of the woman.”

“Following this, the armed robbery suspects who shot and killed her were charged to court vide the charge No E/333C/2019, filed against them, before an Enugu High Court, signed by Mr. Celestine Odo, a Superintendent of Police, attached to the Legal/Prosecution Section, Force CID. They were alleged to have committed “armed robbery and murder punishable under Section 1, (2) (a) and (b) of the Robbery and Firearms (Special Provisions) Act, Cap. R11, Laws of the Federation of Nigeria, 2010 and Section 274(1) of the Criminal Code.”
Particulars of the offense as contained in the charge read: “Chidiebere Ochi ‘m’, Amandi Ekwo ‘m’ a.k.a. “Pharaoh”, Uchenna Onuora ‘m’ a.k.a. “Amigo” and others now at large on or about the 21st March 2019 at about 1700hrs, at No. 38 Enugu-Ezike Street, Federal Housing Estate, Trans-Ekulu, Enugu, within the Enugu judicial division, while armed with two pistols loaded with ammunitions did rob one late Dr. (Mrs) Maria Amadi of her mobile phone, value yet unknown and an undisclosed sum of money and at the time of the robbery shot her at the lower abdomen and upper thighs.

In count 2, they were said to have committed murder punishable under Section 274(1) of the Criminal Code Cap. 30 Laws of Enugu State of Nigeria, 2004.”

“Furthermore, an interim police investigation report signed by CP Olafimihan Adeoye, Commissioner of Police, FSARS, Force CID, recommended that the case of criminal conspiracy and murder that was charged to court by the State Criminal Investigation Department, (SCID) Enugu State Command against Mrs. Buzo-Maduka Ruth, Mr. Afam Ndu, and Mrs. Achara Stella should be withdrawn from the court.”

“Besides this, the National Human Right Commission (NHRC) after examining the substance of the case, in its letter to the Chief Judge of Enugu State Judiciary, Ref.No.NHRC/ABS/2019/056 dated January 14, 2020, described as “an aberration of justice” the continued incarceration of Mrs. Buzo-Maduka Ruth, Mr. Afam Ndu, and Mrs. Achara Stella over the same murder of Late Nurse Maria Amadi which the police found and clearly stated they were not involved and for which the apprehended armed robber suspects that confessed to the crime have been charged to court.”

“We have heard many things about this case including how Governor Ugwuanyi has tied the hands of the Enugu State Chief Judge and that of Attorney-General of Enugu State over this case such that our members will languish in perpetuity in jail and will never come out alive to resume their duties as the Principal and Vice-Principal of the School of Nursing.

While we do not want to cling on rumors, we respectfully demand from Governor Ugwuanyi and the Chief Judge of Enugu State to tell the general public why these innocent employees of the FHNE are still unjustly incarcerated despite mounting and formidable evidence that shows that they have no hand in the death of Nurse Amadi.”

“While we humbly beg the Governor of Enugu State, His Excellency Rt. Hon. Lawrence Ifeanyichukwu Ugwuanyi, for the umpteenth time to forthwith release our members and the other employee of the FNHE that are unjustly incarcerated by the Enugu State government, we want to make it abundantly clear that we shall squarely hold him accountable should anything untoward happen to them while in this inexplicable, unjust and unwarranted incarceration for a crime they never committed”