The remains of late Engr. Okpako James Rangers Edevbie was yesterday laid to rest amidst tributes and encomiums at his country home in Afiesere community, Ughelli North of Delta State.

The journey of the late patriarch and father to the Chief of Staff to the Delta State Governor, Olorogun David Edevbie  started about 10:43 am, in a processional parade to All Saints Cathedral, Ughelli.

In his tribute, former Nigeria President, GoodLuck Jonathan said, “The people of Delta State and Ughelli North in particular will miss the late icon for humanitarian services.

“He was one of the foremost indigenous engineer from the Niger Delta and contributed immensely to the development of respective communities in Ughelli, Delta State.

“He will be missed by his family and the good people of Delta State most especially the people of Ughelli LGA.”

Also, Delta State governor Sen. Dr. Ifeanyi Okowa stated that, “It is his eternal credit that the world is blessed with such an outstanding and inspirational son as your esteemed self whose life have continuously impacted positively on the lives of several thousands. 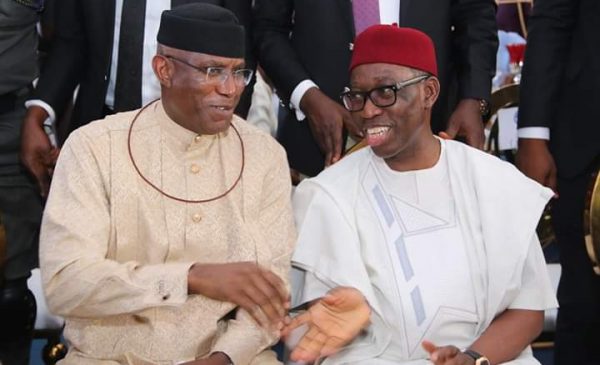 Deputy Senate President, Sen. Ovie Omo-Agege in his tribute said, “Having worked closely with you in the service of our Delta state people and known your family, one can therefore say that papa Edevbie lived well and has now left a beautiful and priceless legacy of a reputable family name for you.”

In his homely titled, ‘We shall give Account of our lives, the Bishop of Ughelli Diocese, Anglican Communion, Rt. Rev. Cyril Odutemu urged Christians, politicians and leaders spend their time wisely because they will give account of themselves.

According to him, “The judgement of God is not like the Nigeria judiciary where one can buy judgement and Judges over, it only only when we repent from our evil ways that one can make heaven.

“Office and position will not be an excuse in the sight of God when giving account, Anglicanism and Pentecostalism will not save us neither the big robes we wear except we repent.

The Bishop advise Delta state governor never to commission uncompleted projects in the state because one day he will give account.