CHIEF of Staff to the Deputy Senate President, Dr. Otive Igbuzor, former Provost of College of Education Warri, Dr. F.O. Money and four others were being honored and inducted into the Hall of Fame by indigenes of Emonu-Orogun community in Ughelli North Local Government Area of Delta stnoate.

The ceremony which was organized by Emonu indigenes was in recognition and the appointment of Dr. Otive Igbuzor as the Chief of Staff to the Deputy Senate President, Sen Ovie Omo-Agege, senator representing Delta Central.

Presenting an address on behalf of Emonu indigenes, Mr. Akpodubrai Philip said, “I want to inform you that our gathering here today is the first practical step that the organizers of Emonu-Orogun worldwide platform to actualize their vision even though much has been achieved through the effort of well-meaning individuals.

Akpodubrai also hinted that the primary purpose of the event is to foster love, unity, peace, progress and development in Emonu-Orogun. If the people are developed either by way of education or empowerment of whatever nature, there will be multiplier effect which in turn leads to community development because it is the people that will develop the community and that is why we incorporated the hall of fame into today’s event.

While appealing to those who are not captured in the event, Akpodubrai said, “We will continue from where the organizers of this event stop to remember such people that have selflessly and sacrificially contributed in one way or the other to move Emonu forward.

Responding, Dr. Igbuzor said, “I am humbled by this honor done to me and other recipient by Emonu-Orogun indigenes worldwide, this honor has defied the popular notion that a prophet is not honored in his own town and as you all know, I grew up in Ugono-Orogun but few years ago, I decided to build my home here in Emonu and the reception, I received was overwhelming. 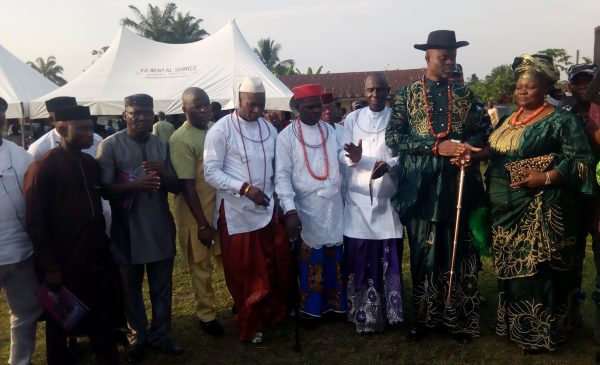 “Similarly, in 2012, I started consultation to run for the position of governor of Delta state under the platform of Action Congress of Nigeria, ACN, and then subsequently in All Progressive Congress, APC, I received overwhelming support from my family members and Emonu indigenes.

During the APC ward congress in Emonu in April 2014, it was a like carnival, during the 2019 elections, my party APC received a lot of support here in Emonu and I was humbled when people from the different political perceptions came to my house few days to the election to asked about the way to go.

“I am happy to inform you that I have a vision of a world of peace, justice and prosperity and irrevocably committed to fighting injustice, oppression and poverty, I have a mission to impact lives spiritually, financially, politically, socially, morally and knowledge wise.

“As Chief of Staff to the Deputy President of the Senate, I will prioritize service over everything else, I want to use this opportunity to appeal to my families, friends and community people not to assess me at the end of my tenure based on how much I am able to accumulate to myself but they should assess me on how I am able garnish my office and assist the Deputy Senate President and make a difference to offer services to our people.

“Let me use this opportunity to thanked the Deputy President of the Senate, H.E Sen. Ovie Omo-Agege for appointing me as his Chief of Staff, the reason we are gathered here today. I am particularly happy that my principal is a courageous man who is committed to justice and service delivery and for the past few months that I have worked closely with him, he has demonstrated dedication to making a difference, changing the narrative and ensuring service delivery.

“I am grateful to Obarisi for giving me the opportunity to service and creating enabling environment and as I speak a transformer is on its way to Emonu.

Speaking further, Dr. Igbuzor stated that, “It will not be out of place to say that you all know me very well including my character and conduct, even before this my appointment, I have submitted myself to the service of God and humanity and under the able leadership of the Obarisi of Urhobo land, I will do my best to contribute to the development of Emonu and indeed the entire Delta Central.

“With the public hearing on the establishment of  Federal Polytechnic Orogun that was held few days ago, I assure that we  will push for the employment of our people, we will push for avenues for empowerment, we will contribute to the infrastructural development of our constituency and provide opportunities for human development and provide dynamic and visionary leadership without sentiment.” Dr. Igbuzor assured.

Also, the former Provost of College Education Warri, Dr. F.O. Money who chaired the event said, “I am happy, I am elated, if you are working and the people recognized what you are doing, it is a kind of motivation and it gives you more inspiration to do an I am quite impressed.

According him, “When you belong to a community, it is God’s doing that you came from that community and once you get to a point where you have some capacity, I believe you should give back to the community because when you give back, you are helping the community to develop.

“There are so many ways of giving back, you can award scholarship that means you are promoting education, others are infrastructure, projects, empowerment and by doing this, you are directly and indirectly developing and promoting the community economically, politically and otherwise.” He said.

One Thought to “Emonu Indigenes Induct Dr. Otive Igbuzor, Money, Others Into Hall Of Fame”