Aggrieved members of the Delta State Local Government/Primary School Teachers Contributory Retirees today, Tuesday, September 8, 2020 hit the roads in Asaba to make good their decision to do a peaceful protest to call attention of Governor Ifeanyi Okowa and the public to their plights with a view to getting the governor to show compassion and benevolence to them in their predicaments.

They are aged, fragile men and women, who wore black outfits chanting songs and carrying placards with various inscriptions to press home their demand for attention and succour.

As they sang the lyrics of their tunes read: “Okowa, pay our money o, Okowa’, while some of the impressions on the various placards read: “Okowa, where is our gratuity, pension?” “Okowa fear God.” Okowa, what will you gain if we die?” “Our pension matta, No retreat, no surrender.” “Don’t make us refugees in our home land.” “Yeye SMART Agenda, not for retirees”; “Governor Okowa stop campaigning in Edo, just do what Edo State did to her retirees to Delta retirees.” “Okowa, enough is enough, Pay us our money, it is our right,” etc, etc.

Their first point of call was the Delta State House of Assembly, where the gate was shut against them, having sought to meet with the Speaker, Rt. Hon. Sheriff Oborevwori and the House members. But, after a long wait, a handful of civil servants, let by Mr. Ogheneraboke Ben, and who introduced himself as the Assistant Director, Legislative matters spoke to the retirees from the other side of the gate and received the letter addressed to the Speaker from them for onward transmission to him. Ogheneraboke said: “We are civil servants, we are just like you; we share in your pain.”

They then proceeded to Government House, on Anwai Road, traveling in no fewer than 15 chattered commercial vehicles from across the three senatorial districts of Delta State, where they were stopped at the gate by security operatives, but after another wait, government officials including the political Adviser to the governor, Hon. Omimi Esquire, the Head of Service, Mr. Reginald Bayoko, and the Nigeria Labour Congress Chairman, Comrade Goodluck Ofobruku among others.

The retirees in their letter to the Governor, signed by Mode Augustine, and Sir Henry Tukpe, copies of which were made available to journalist, expressed dismay over the ways and manner issues concerning their plights were being handled by the state government. Pointing out that having served satisfactorily the 35 or 60 years statutory age requirement for retirements, and having met their part of the contribution of seven and half percent since inception of the Pension Scheme in 2011, they declared: “We have suffered enough hardship and humiliation since our retirement. Based on the above and the perennial delay in payment of gratuities and pensions to the local government staff and their primary school counterparts, we wrote appeal letters to you our Governor dated 27/01/2020 which was replied on the 26/02/2020 and a subsequent reply from this body dated 17th June, 2020 and other subsequent meetings that have not yielded any results, hence our decision to protest to you publicly of our plight and ask you our governor to be compassionate and humane to our plights.”

The text of the letter continued: “This action has become inevitable after all negotiations with your agencies failed to yield results and we were not hearing any news of remediation. Our members have suffered untold hardship, humiliation and we have lost several of them to death due to ill health and disease, lack of care and money to purchase basic medication. We have suffered enough Sir.

· That there is an unremitted deduction from staff contribution that accrued during the zero allocation eras amounting to N5.9billion.

· eau and shared for the payments of the arrears between the local government retirees and primary school retirees at N114,000,000 and N184,000,000 respectively.

“The question now is, how long will it take before these retirees will enjoy their pensions with the current release of monthly N300,000,000? With a monthly release of N300 million, which according to Bureau is shared thus: 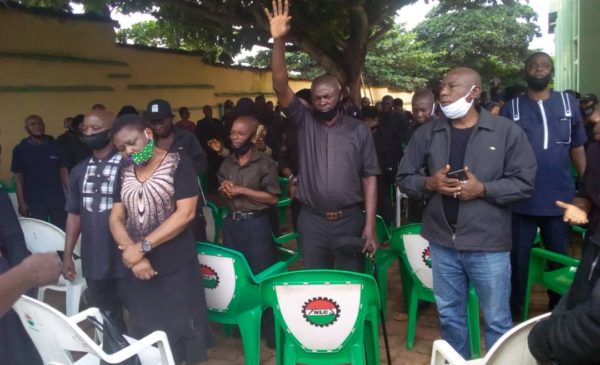 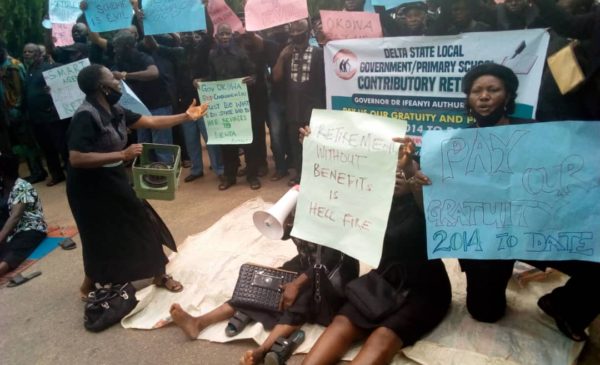 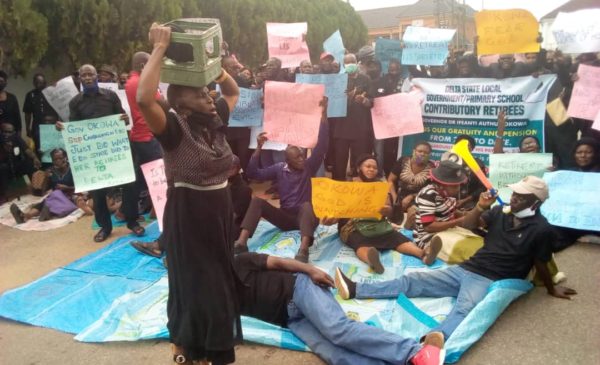 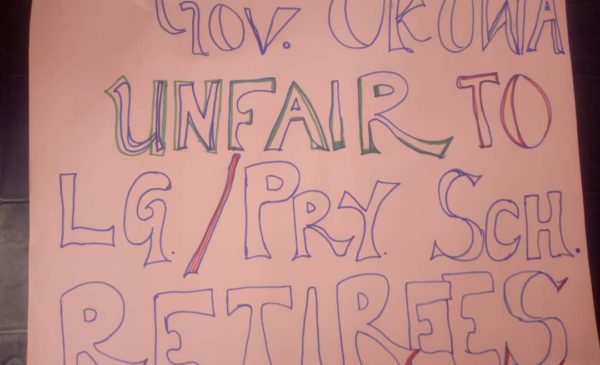 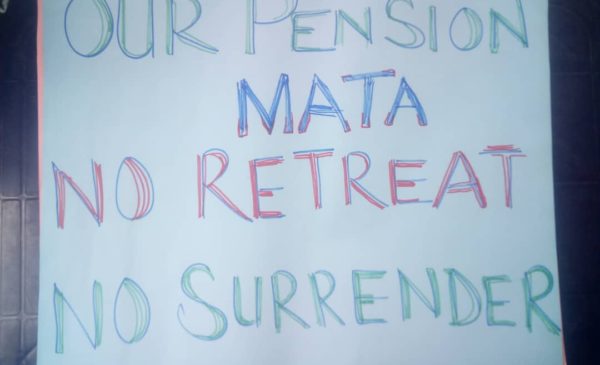 “The above statistics shows that government wants her local government/primary school retirees to be without any means of livelihood for over 6-18 years after retirement done after 35 years of active service or 60 years of age. What is the average life span of Nigerians? – 54 years. For the state government to expect her retired senior citizens who left after 35 years of service or at age 60 to wait for another six to 18 years before they can be paid their pension entitlements should not be allowed and condoned by men of good will. These are men and women who even contributed seven and half per cent of their monthly salaries to the scheme.

“We therefore appeal to you to save the local government/primary school retirees from untold hardship, pains and tears we are passing through while waiting endlessly to collect our pensions. Most of us have no other means of livelihood apart from the salaries that were stopped following our retirement; making the situation unbearable as some are on medications, others living in rented apartments, while many are struggling to pay children school fees, etc.”

In their plea to the governor, the retirees appealed to the Governor to look into:

· The possibility of increasing the monthly allocation from N300million to N2 billion, until the backlog is offset.

· The need to provide some lump sums of payment, like N10 billion to the Burteau apart from the monthly allocation of N2billion. This is done by other states in the federation that are committed to the plight of their retirees.

· The need to compel the state leadership of ALGON and the Accountant General to pay the sum of N5.9 billion unremitted deduction that accrued during the zero allocation eras to the Bureau as it may go a long way in liquidating the existing indebtedness of over N48 billion.

· The possibility of the state government intervening with Pencom to see to how our retired members can access part of what they have contributed with their PFAs by writing to the PFAs to authorize them to pay from our savings that is in their custodies. 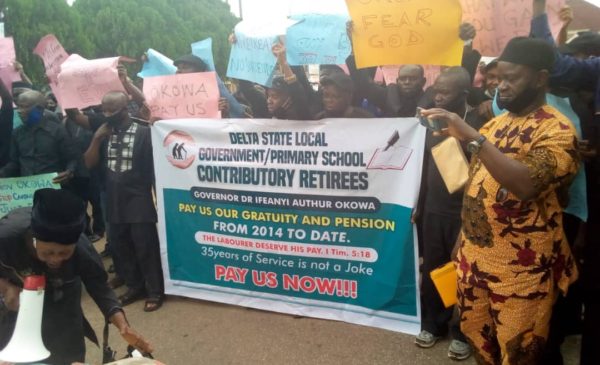 “Sir, it is the desire of the retirees to smile and be removed from hardship and perpetual sufferings, since the Delta State Pension Bill 2008 in Section 13 (8), 13 (9, 10) , 16 (5) and 16 (6) is clear on this. We solicit the Governor’s understanding of our plea, as it will go a long way to saving lives and cushion the untold sufferings we are going through right now,” the retirees pleaded

According to a retiree, Mr Stephen Efe, Governor Okowa should be ashamed of himself that he is going to Edo state to campaign when he cannot pay pensioners.

“The Edo state government is not owing pensioners any dime and it is expected that he should have learn from his brother state and not by punishing us after serving our great state for 35years.”