The Royal father gave the commendation when Bashorun Askia and management team of the Commission paid him a courtesy call in his palace at Isiokolo, before proceeding to commission two blocks of eight classrooms at Ibruvwe Primary School, constructed by DESOPADEC, at Samagidi, Ethiope East Local Government Area, at the weekend. 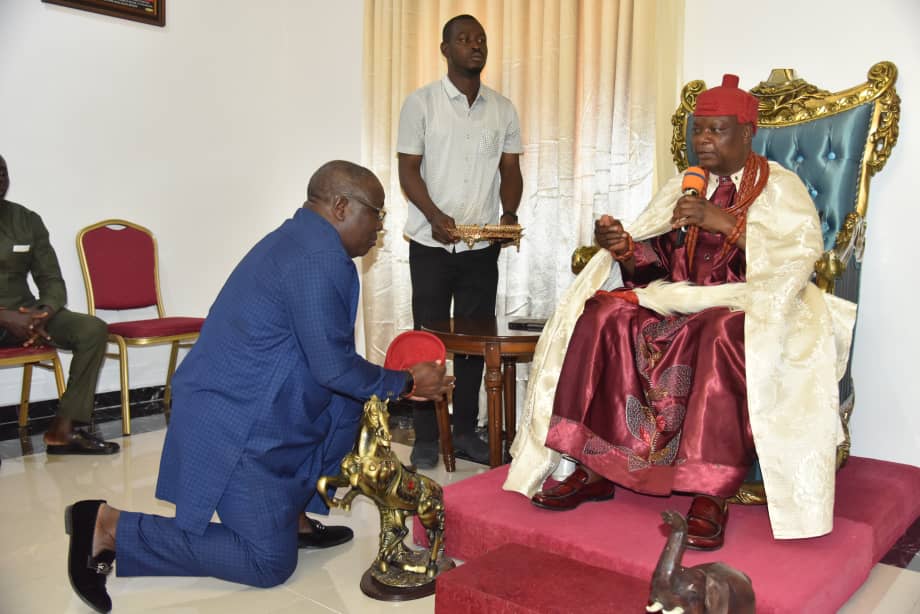 He explained that since the inauguration of DESOPADEC in February, 2007 by Chief James Onanefe Ibori’s administration, the Commission, now led by Bashorun Askia Ogieh, has metamorphosed into a responsive and result-oriented establishment, executing projects that touch the lives of the people in the oil producing communities of Delta state.

“Another important point I want to make with DESOPADEC is that I am one of those who stood by Chief James Onanefe Ibori to set up DESOPADEC in February 2007. That shows how close I was to the pioneering stage of DESOPADEC, and I am happy that what we put together in 2007 has metamorphosed into a very great and commendable establishment, for the uplifting of the lives of our people, the oil producing communities of Delta state”, he emphasized.

The Ovie of Agbon Kingdom, further commended the weekly television programme, tagged DESOPADEC’s Giant Strides in developing the oil producing areas of Delta State, to showcase the significant contributions of DESOPADEC to the building of a Stronger Delta under the good governance of His Excellency, Senator Dr. Ifeanyi Arthur Okowa.

The weekly television programme, DESOPADEC WEEKLY, is shown every Tuesday, Wednesday and Friday on AIT, NTA Asaba and DRTV Warri at 9.00am, 6.30pm and 6.00pm respectively.

According to the traditional ruler, “Those of us who are confined to the four walls of our rooms on daily basis, who do not go out from our rooms as traditional rulers, every Tuesday we always take time off to watch the activities of DESOPADEC and its always a story of successes, stories of achievements, stories of progress and stories of happiness for the people of the oil producing communities. And it is not unconnected with the seriousness with which the Managing Director is handling his position.”

He said that since Bashorun Askia took over as Managing Director of DESOPADEC, quality of projects executed has improved greatly, the citing of projects have been and fair while the scope benefits by the communities has increased through the employment of their youths.
The monarch said it is clear Askia has brought his sterling personality to bear in the Commission’s effective service delivery in both human and infrastructural development, adding that the executive directors and commissioners have also aided in the series of successes recorded by the Commission.

“When Bashorun took over, and since he took over the sky has been the limit of his performance. He is always there at the commissioning, he will never delegate people, he will never sway round the civil chairs in his office, he is always in the sun and in the rain, both at inspection of projects and at commissioning of the several projects, so kudos to Bashorun Askia Ogieh. If we talk about the MD success or successes it is also not unconnected with the serious and astute support being given to him by the executive directors and commissioners.”

He however appealed to the Commission to sustain the good works they have been doing in the mandate oil and gas producing communities in the state and called on them to execute more projects in his kingdom.

“With the commissioning of two blocks of eight classrooms for our pupils, after this I hope you will come again to commission more projects, apart from that also to commission something in the palace,” the Monarch said.