Twenty Eight years (28) after the demise of Abraka first legal practitioner, late Tobi Dafe Esq, his children family and relatives in a solemn celebration remember their patriarch who passed  away on February 25, 1993.

In remembering their father was is a Prince in Abraka in Ethiope East local government area of Delta State, Prince Tobi Dafe Jnr described his father as disciplined, principled and upright man whose footsteps is yet to be filled.

Born on March 18th. 1920 into the family of HRH David Oghenegweke Dafe of the Dafe royal house, Urhuoka and Madam Uvwemete of Okorodudu family in Oria Abraka.

He later got employment with the Nigerian Custom Authority, serving in Port Harcourt and Calabar respectively before proceeding for further studies at the United kingdom in 1956 where he obtained his A levels and a degree in law afterwards.

In 1961, Tobi Dafe emerged president of the Nigerian student Union by an election won by 3 votes against his closest opponent, hence becoming the first Urhobo to hold that position and secretary General of African union of students. This made the Nigerian Government to send a delegation to England to congratulate him and also attend the swearing in ceremony, the delegation included the then finance minister( Okotie Eboh) and Tafa Balewa to mention a few.

He returned to Nigeria in April 1964 and was received in a grand style as his kinsmen were dressed in one attire to receive the first man to travel overseas for studies and Abraka’s first lawyer. This ceremony was one of a kind and witnessed by his first two daughters Princess Enita Oboh(Dafe) and Princess Odiri Dafe ( United Nation rtd) 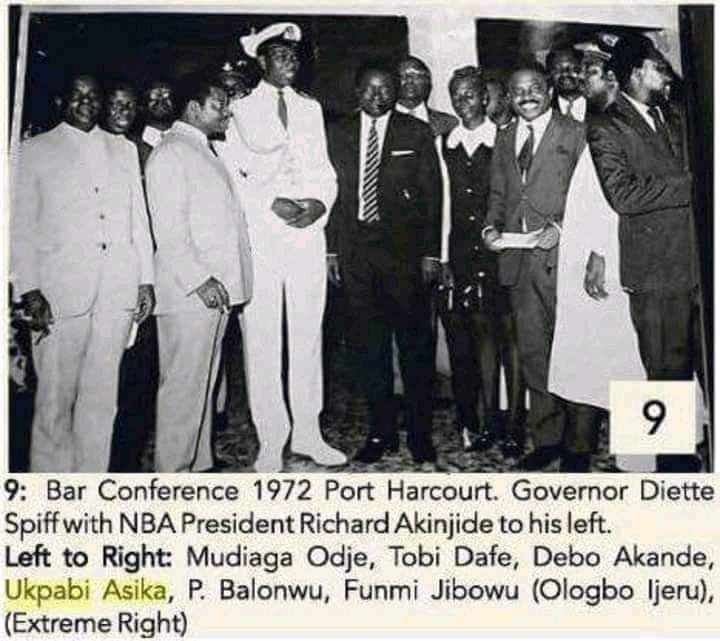 Tobi Dafe loved his family and kinsmen so much, his house was a landing base for all, as long as you were ready to further your studies or get a job, uncle Tobi is your daddy!

He was a disciplinarian by all standards, everyone who lived with him could attest to that.

He was also a sports lover, soccer was one sport he had so much passion for, as he would fly to UK just to witness a live match at his leisure time.

When you talk about intelligence, he was one of the finest in his time, while a lot of people went for English studies and other related courses he distinguished himself and went for law ( on merit) in England and emerge the first Abraka son to practice Law in the early 1960’s.

He was an active member of the Nigerian Bar Association (NBA) his role in the Association can not be forgotten in a hurry. He was referenced in several articles and books written by legal practitioners such as Hairat Balogun in the book titled, To Serve in Truth and Justice amongst others.

He was an activist, a philanthropist, who was ever ready to sacrifice to help everyone he came across in his life.

After the death of his father, with his only brother, late Prince Adam Dafe dead as well, he became the only surviving son to late HRH Orhovworho 1, D.O Dafe the Ovie of Abraka kingdom ( Abraka’s first King) who joined his ancestors on 2nd November 1990, he was asked to take up the mantle of Leadership at home, hence he retired home after the funeral of the father in 1991, were he spent his last days. Due to several health challenges, he died on 25th of February 1993.

May his Gentle soul continue to rest in perfect peace. Amen.

Daddy till we meet again to path no more, you are forever cherished in our hearts we love you, though dead, your memories are still fresh in our hearts.