COMMUNIQUE ISSUED AT THE CONCLUSION OF THE MEETING OF THE GOVERNORS OF SOUTHERN NIGERIA IN GOVERNMENT HOUSE, ASABA, DELTA STATE, ON TUESDAY, 11TH MAY, 2021

At its meeting, held today, 11th May, 2021, the Southern Governors
Forum reviewed the situation in the nation generally and focused on the current security situation, agitations/restructuring, prospect for inter-state collaboration and partnerships as well as on the incidence of the COVID-19 Pandemic. Rising from the meeting, the Forum:

i) affirmed that the peoples of Southern Nigeria remain committed to the unity of Nigeria on the basis of justice, fairness, equity and oneness and peaceful co-existence between and among its peoples with a focus on the attainment of shared goals for economíc development and prosperity;

ii) observed that the incursion of armed herders, criminals and bandits into the Southern part of the country has presented a severe security challenge such that citizens are not able to live their normal lives including pursuing various productive activities leading to a threat to food supply and general security. Consequently, the meeting resolved that open grazing of cattle be banned across Southern Nigería ;

iii) noted that development and population growth has put pressure on available land and increased the prospects of conflict between migrating herders and local populations in the South. Given this scenario, it becomes imperative to enforce the ban on open grazing in the South (including
cattle movement to the South by foot);

v) agreed that the progress of the nation requires that urgent and bold steps be taken to restructure the Nigerian Federation leading to the evolution of state police, review of revenue allocation formula in favour of the sub-national governments and creation of other institutions which legitimately advance our commitment to and practice of true federalism; 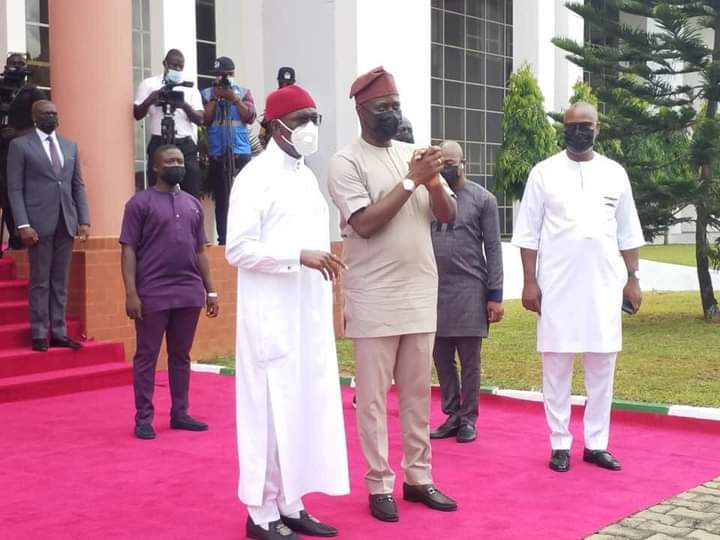 vi) recommended that in view of widespread agitations among our various peoples for greater inclusiveness in existing governance arrangements, the Federal Government should convoke a national dialogue as a matter of urgency;

vii) recommended that in deference to the sensitivities of our various peoples, there is need to review appointments into Federal Government Agencies (including Security Agencies) to reflect federal character as Nigeria’s overall
population is heterogenous;

ix) expressed concern on the continued gridlock on the Oshodi – Apapa Expressway and the chokehold it has exerted on the nation’s economy being the sole outlet from Apapa Wharf. The meeting therefore recommended the activation and establishment of ports in other States of the federation to create new jobs and promote socio-economic
activities in the country; 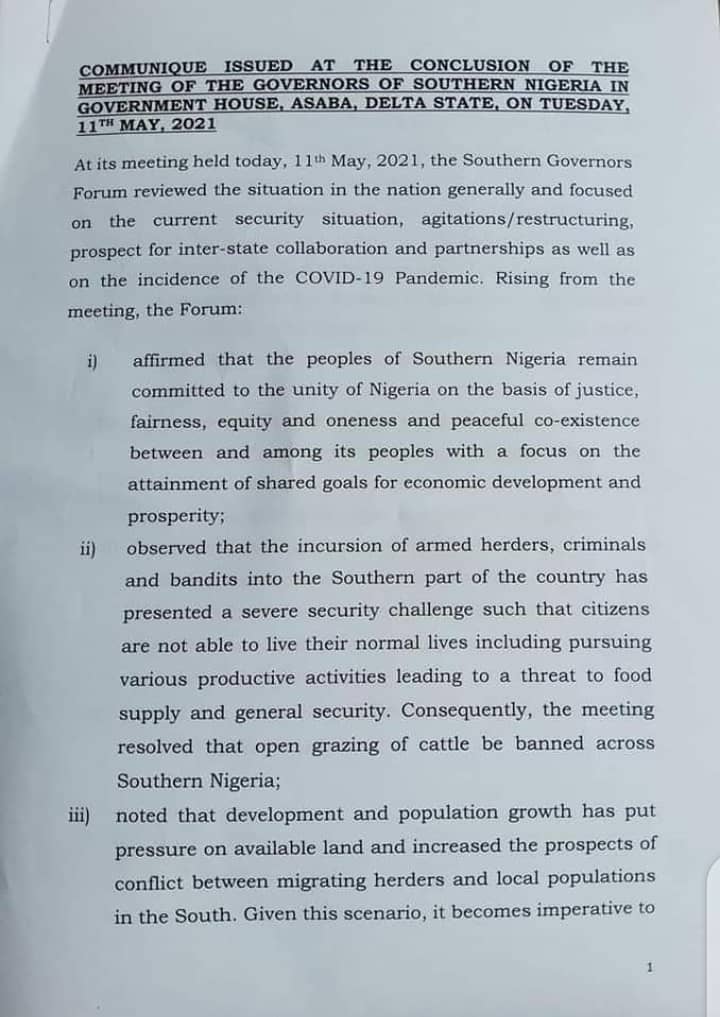 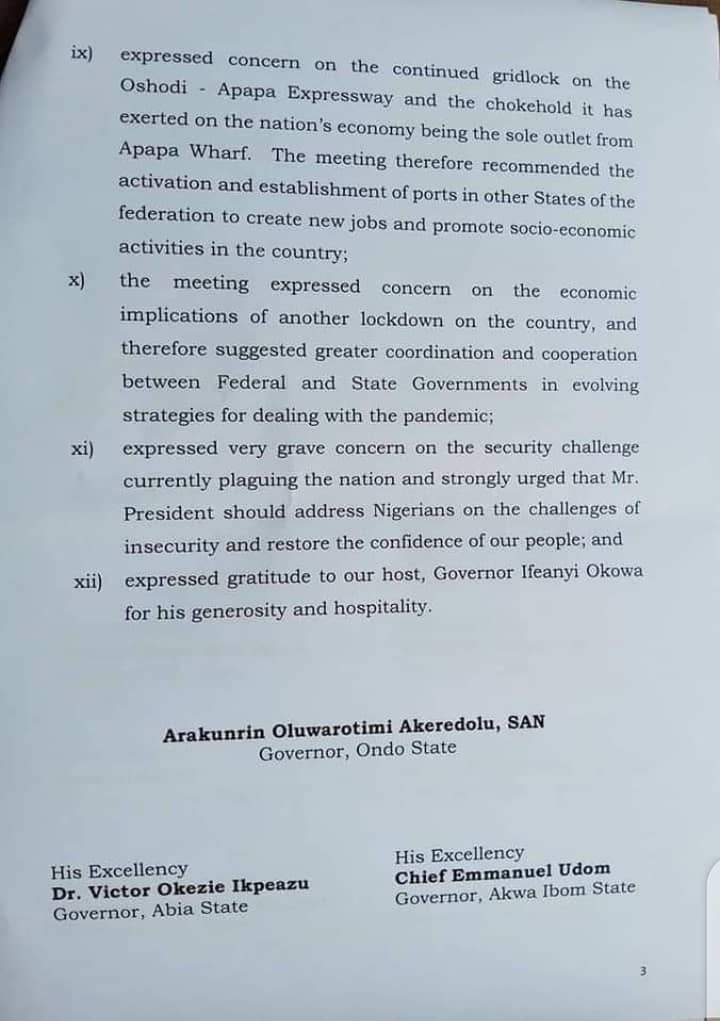 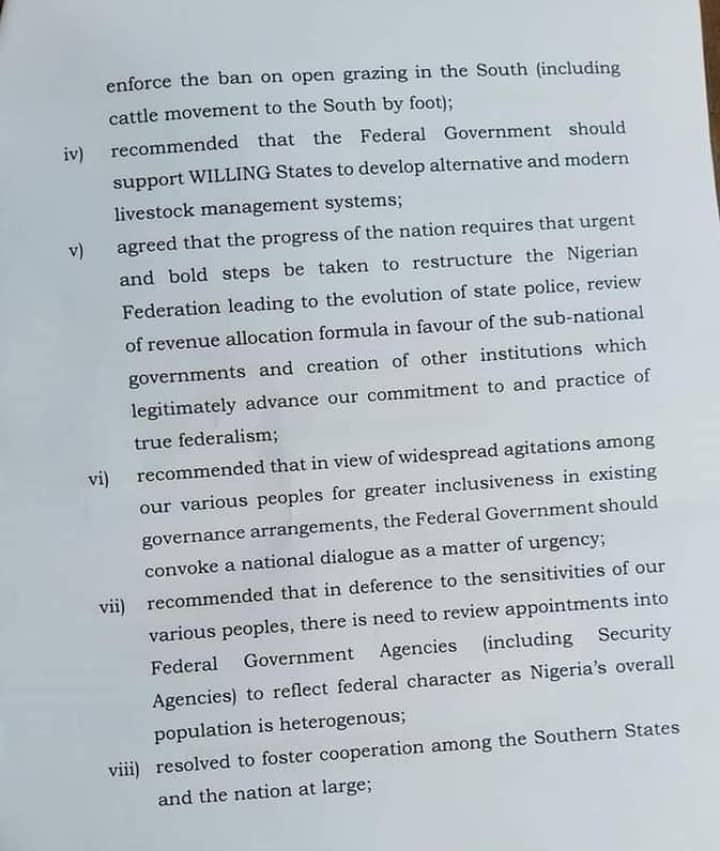 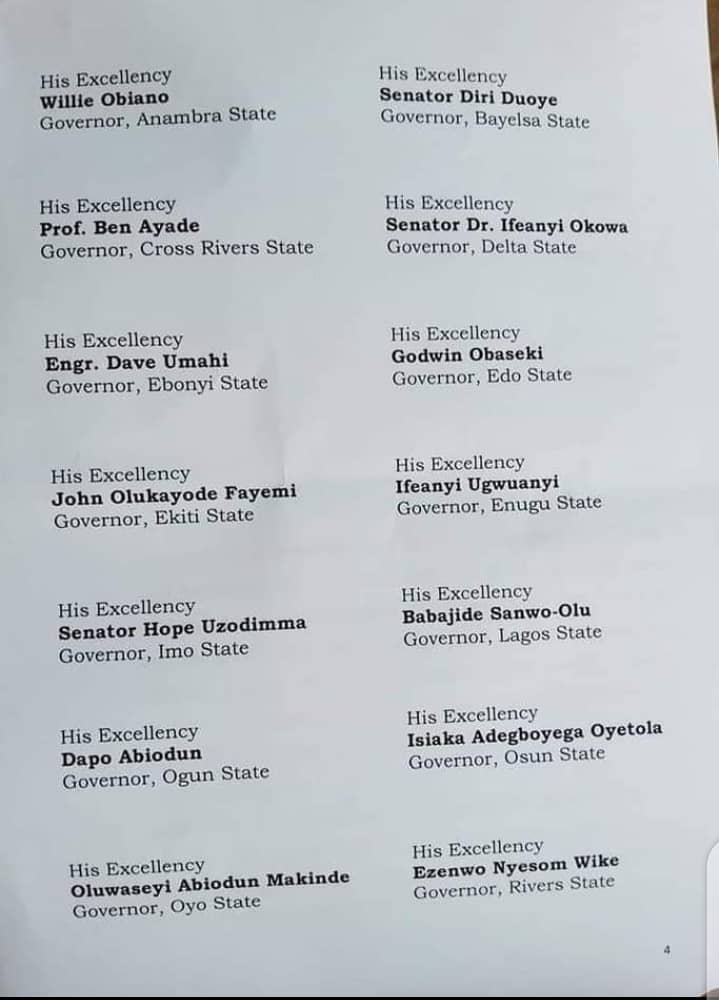 x) the meeting expressed concern on the economic implications of another lockdown on the country, and therefore suggested greater coordination and cooperation between Federal and State Governments in evolving strategies for dealing with the pandemic;

xi) expressed very grave concern on the security challenge currently plaguing the nation and strongly urged that Mr. President should address Nigerians on the challenges of insecurity and restore the confidence of our people; and

xii) expressed gratitude to our host, Governor Ifeanyi Okowa for his generosity and hospitality.