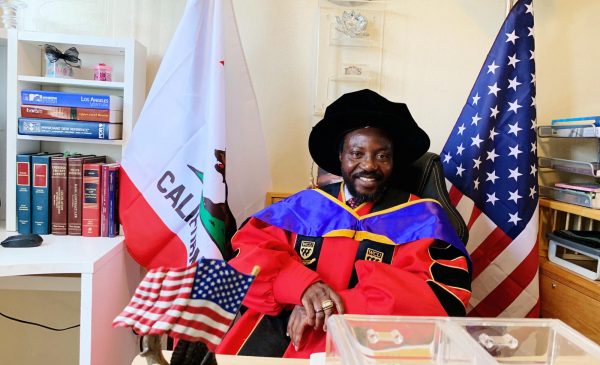 The emergence of a motivating and Talented Professor of Economics and Management, Sir. Kolapo Ige as the Provost of West Coast University International, Los Angeles, California campus of the University through approval of the both state governments of the State of Delaware, and California in USA that permited the University to operate through it chartered as legitimate entity is a great feat worth celebrating.

The message of the newly Appointed Provost of the great institution was conveyed to us through His Excellency World Distinguished Professor Sir Bashiru Aremu the Vice President (Vice Chairman) of West Coast University USA to our reporter in a telephone conversation today while thanking God for his Mercy and protection stated that the elevation was an act of God.

The World Grand Board of Directors of West Coast University USA has approved his appointment after he had passed the criteria after presenting his application to them.

Prof Sir Kolapo whose primary research interests are in empirical Labour Economics, Manpower planning and macro – economic modelling where he had authored a number of books.

The Provost who doubled as a World-class Professor of Economics and Management noted further that he had accomplished many feats which included amongst others: Authored several articles in European Journals of humanity and Social Sciences.

The Provost also noted that he had as part of his other achievements had guided students in Using technoloy to support research, mentoring and supervising ph.D Students on research writing, taught introductory and upper level courses in Economics and Econometrics, and many numerous achievements in his Educational career.

Historical, West Coast University (WCU) is a federation of 35 affiliated colleges/centers in 21 countries. These colleges are legal entities to impart education in the countries of their existence. University is incorporated in the Republic of Panama, Central America, under clause 19 of Law 32 of 1927 of Panamanian law. Being a global university.

He Stated that WCU has not sought Accreditation in Panama, but is accredited by International accrediting agencies that recognized by both Department of State and Department of Education of United States of America.

WCU is also incorporated in Costa Rica and its international coordinating centre is Chartered in State of Delaware –United States of America as West Coast University Corporation with a full campus in state of California USA.

Basically, Accreditation Commission of Business Schools and (ACBSP) above all University has been confirmed as one of recognised Universities by UNESCO database of Universities world wide.

To this end, this great feat was achieved through a Nigerian World renowned Professor of ICT and VC Crown University Intl.Chartered Inc. Ghana, Americas and partner campuses world wide who is a member of the Board that supervised the selection of Candidates that applied for such Noble position and the Vice President (Vice Chairman) of the great institution.