Skip to content
By Politics Governance,
DELTA State Governor, Dr. Ifeanyi Okowa has described the multi-billion naira Effurun-Otor/Ovwor bridge in Ughelli South Local Government Area as very important that will meet the demands of the people having access to their various communities.
Speaking  yesterday at Ovwor-Olomu, Governor Okowa who on inspection visit to the bridge expressed satisfaction at the level of work done by the contractor.
According to him, the contractor is delivering the project to specifications and on schedule.
Governor Okowa said, “There was a time we came to inspect this road project and the people sent a delegation to draw our attention to the river which they must cross with canoe to meet their kits and kin and we looked at their plight and includes the bridge to the work
Today,  it is a thing of joy that we made the right decision and the people are happy with what we are doing.”
“When we make promises, we try as much as possible, relying on God to keep the promise because we believe that no part of Delta State should be deprived of basic amenities, no matter who is involved.
“We are constructing roads in the creeks, very soon, we shall be commissioning more projects in those riverine communities
“From what we can see, the bridge is 80 per cent completed and the contractor has promised to complete in February, which is the major work as the access roads can only be constructed once the bridge is ready.”
Commissioner for Works, Chief James Augoye disclosed that the bridge and road projects would cost more than N2b. 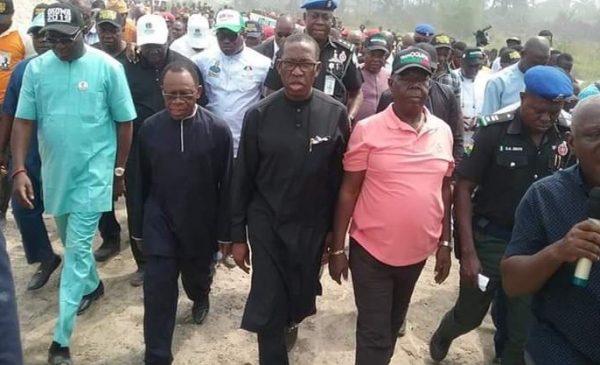 “I am proud to be part of this government, our Governor, Senator Okowa is committed and very passionate about road construction, he believes that communities in the state should be linked by road because of the socio-economic benefits of having good roads.”
“Governor Okowa, the road master is God sent, he has given us road, vehicles can now get to our communities, we believe those who are contesting against him will step down, because, it is the turn of Delta North to complete two terms and we are comfortable with Dr Okowa as our Governor.” an Ovwor and Effurun-Otor community leaders said.
Post Views: 31