In a petition addressed to the Governor of Delta State, Senator (Dr.) Ifeanyi Okowa by Edjophe community, signed by its President General, Mr. Clement Ufuophu and Secretary General, Mr. Edijala Obatarhe, appealed to the governor to intervene urgently as the workers are geared for showdown with Nigeria Petroleum Development Company and ND Western. 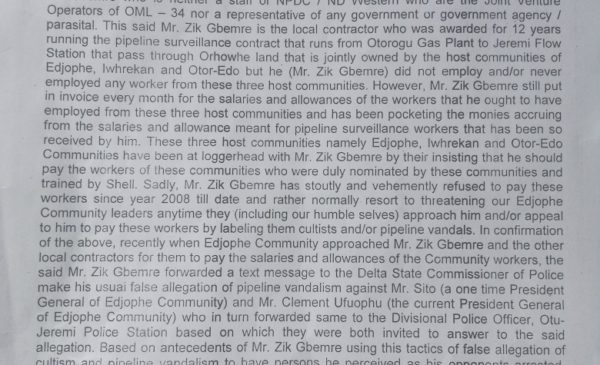 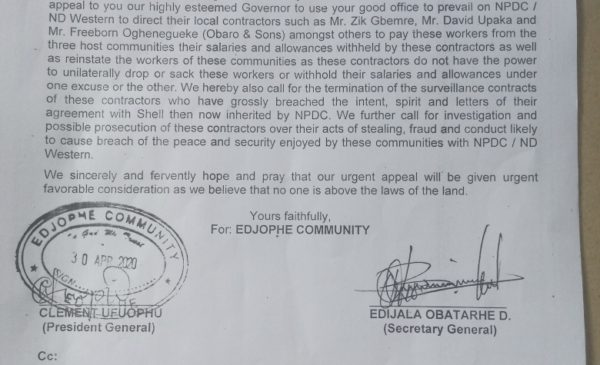 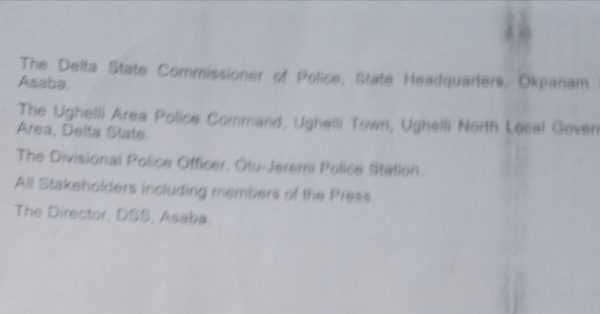 The community explained in the petition that sometime in 2008, Shell Petroleum Development Company (SPDC) introduced cast surveillance to secure the pipelines in the various host communities and thus employed workers through recommendations from leaders of the host communities and that the workers were trained by SPDC that later handover the workers to local contractors for prompt payment of salaries and allowances.

The community stressed in the petition that the local contractors handling the surveillance contract of the pipeline that runs from Utorogu Gas Plant to Jeremi Flow Station that passes through Orhowhe land jointly owned by Edjophe, Iwhrekan and Otor-Edo, dropped all workers of the host communities under the pretence that they are fighting pipeline vandals whereas there had not been any act of pipeline vandalism in Edjophe, Iwhrekan and Otu-Jeremi communities which NPDC and ND Western, operators of OML-34 can attest to.

According to the petition, “all efforts made by Edjophe, Otor-Edo and Iwhrekan for the contractors to engage the communities’ workers trained by SPDC which were handed over to the contractors fell on deaf ear, hence we appealed to Governor Ifeanyi Okowa to urgently prevail on NPDC and ND Western to direct the local contractors, (Zik & Associate and two others) to pay the aggrieved workers their salaries and allowances as well as reinstate them.

When contacted, Mr. Zik Gbemre, Director of Zik & Associate whom the community alleged to be one of the affected contractors, said if Edjophe community have complains as it relates to pipeline surveillance contract, they should forward it to NPDC and ND Western and not on the pages of newspapers. “As a human rights activist and patriotic Nigerian, I will do everything to put a stop to pipeline vandalism in Edjophe, Otor-Edo and Ughevwughe communities, no matter the blackmail and intimidation”, he added.