Skip to content
A 300-level law student in one of the Nigerian Private Universities (name withheld), has revealed how Medical Doctors attached to new hospital at Asaba in one of the isolation centers, Delta State left his mother to die due to negligence on duty.
The student, Okolo Divine Bliss has called on the Nigerian Government and other relevant authorities fish out this responsible for the death of his mother.
In an audio message obtained by Politicsgovernance, Okolo in an emotional voice said, “Tony this not o,  they are killing people in that isolation, this is not fair at all, look at, my sister”
Narrating his ordeal, he said, “My name is Okolo DivineBliss and I lost my mum today the 27th of June 2020. This is how it happened.
“My mum has been sick for a while now and nurses and doctors have been coming over to the house to administer treatment to her and by God’s grace she was responding fine to it.
“Some symptoms of the sickness were coughing, weakness and she also felt pains….
“So on the 25th June 2020 we decided to move her to the New general hospital Asaba, she walked down through our house stairs all by herself even though she was weak..
“My Dad and my siblings got to the hospital with her and they refused to administer treatment because the doctors were afraid that it was Covid19 as everyone will suspect.
“They abandoned her in pains for over an hour before they decided that they are not going to treat her except she Isolated in their Isolation cente and also her oxygen level became low in the hospital.
“I always said that they shouldn’t have moved her there cause my mum hadn’t gone anywhere to to have Covid even through out the time my sister who has health issues was taking care of her at home she didn’t posses any sign of transfer from my mom so I was fully sure within myself that it was not Covid..
“But since the doctors and everyone refused to treat her we allowed her to be isolated and she was put on oxygen…
They Isolated her in the Center and she was there without no good attention which I can swear to because we spoke to her regularly and she said no doctor or anyone had gone to see her. Then Until the 26th of June 2020 being yesterday My Dad went with my brother to take things for her at the Isolation Center..
“They agreed with my dad that since the case was not yet confirmed and the test result was yet to be out that he could stay and watch her and if anything goes wrong he could call them on phone from the room which he regularly did but they did not respond to him fast whenever her did.
“We stayed awake at home through out the night praying for the life of my mum and talked to my brother who was there with her regularly and he always said that no one was coming to check on her upon they had a CCTV camera in their Isolation rooms. 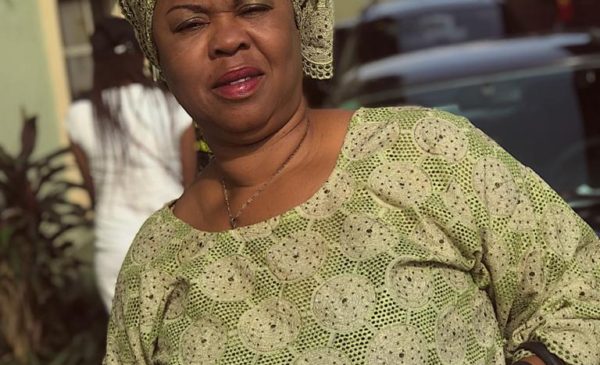 Narrating further, Okolo alleged that  Whenever we call the doctors from home they would say that they have gone to check her and she’s okay but my brother would still say no one(Doctor) has come and she is very weak and breathing slowly.
“This situation of calling and lying by the Covid-19 doctors happened for over 1hour…is that not wicked of them? He questioned.
“This morning at around 5 a.m when the calls and lies of the doctors that said she was doing fine and attending to her came in, we decided to go to the hospital ourselves since my brother was crying bitterly that mom is laying dead….
“When we got there around After 5am we drove to the Covid19 area and kept on screaming that they should go and look at my mum but you know what we were there for over an hour no single Doctor came out to speak to us and these were the same doctors that were telling us that she’s fine and taken care of while we were at home…
“Out of bitterness I moved into the Covid19 ward which they did not lock well and was screaming for help of the doctors and no one still Came out for over an hour, I went into her room that has A CCTV camera where they monitor everything from and started praying but to no avail and no one was still responding to us.
“Patients were coming out of their rooms in the ward to complain. Why would the doctors be so wicked hearing my family’s voice screaming.
According to him, “They did an X Ray which showed she had acute pneumonia which could have obviously been the cause of the Covid 19 symptoms she was experiencing but the doctors were not going to attend to her properly until the result was out and now my mum is dead.
“They couldn’t even face the acute Pneumonia but concluded it’s a Covid 19 case without adequate test… What if the result is out now and it is negative please who killed my mother…..These bloody Health workers and Doctors.
“Please all I need is justice for my mum and support to my family.. She was a Bread winner for us and the one who took care of us always… I don’t know where to go or what to do from here… please I need everyone right now cos it’s like I am single in my world at the moment.
“Who would take care of me ? Who would be my mother? She was the closest to me. Very prayerful and hardworking.. I don’t know what else to think other than to conclude that doctors are careless and wicked in this state…and as real as Covid-19 is, they don’t take it serious In their Isolation centres cause they feel people must die..
“please I need your help for justice and support for my mum”. Okolo appealed.
Post Views: 457