FC Galaxy, Lord Honour, and Delta Eagles have all qualified for the Round of 16 in the 2019 Bet9ja Royal Cup.

These characterized the major events of the opening set of Matchday 2 fixtures of the group phase in the competition, as all eight teams in action across all centers celebrated the #NonLeagueDayNigeria for the first time in all grassroot soccer tournaments in Nigeria on Thursday, October 17, 2019.

At the Kwale Township Stadium, FC Galaxy were unstoppable in their Group C tie, as the slum side flew above Victorious FC 2 – 1 to advance to the Round of 16.

Goals from Olapoju Toyibu and Kore Clever were all FC Galaxy needed to progress and make the last group game a mere formality.

Elsewhere, Lord Honour FC defied the light but steady rainy condition in Oleh on Thursday to pip Delta Warriors by a lone goal in Group E.

An Oroh Ezekiel’s quick strike on the edge of the 18-yard box after a rain-assisted ricochet mid way in the second half was good enough to guarantee progression into the Round of 16 for the elite club from Warri.

A minute silent was observed for a Delta Eagles player who was murdered in cold blood by gunmen on Wednesday at his residence on the eve of their Group G clash with All Stars International Academy.

This tragic dent, however, did not deter the Ozoro team from beating All Stars 2 – 0 to move to the knockout stage of Delta’s premier grassroot soccer showpiece.

Before kickoff all eight teams in action celebrated the #NonLeagueDayNigeria by entering group photographs together with placards bearing the hash tag.

Reacting, a cross section of coaches who spoke commended the brains behind the Non League Day Nigeria movement for deeming it fit to celebrate and create solid awareness for grassroot football in Nigeria, saying that this step taken now would start yielding desirable fruits for the round leather game in no distant time. 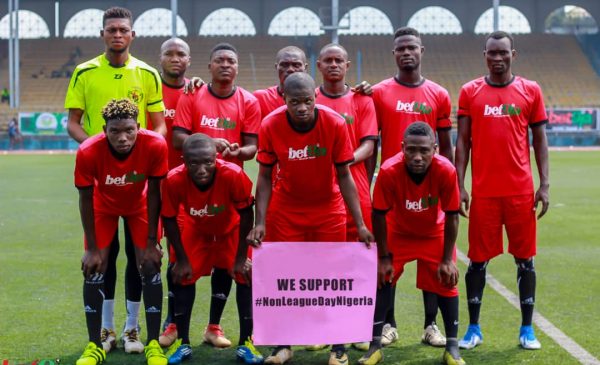 Thursday, October 17, 2019 was generally observed as #NonLeagueDayNigeria throughout all grassroot football tournaments in Nigeria to raise more awareness for the sport and the brains behind it say it would be an annual occurrence every October 17 going forward.