Companies have been trying to shoehorn the voice-powered Alexa assistant onto everything from smartwatches to cars, but strangely, there’s one type of device that still lacks the kind of Alexa integration you’d expect: smartphones.

That’s not to say there’s a shortage of digital assistants from companies including Google, Apple, Samsung and others. But Amazon’s Alexa has mostly been limited to specific sections of software like the Amazon Underground app or half-baked integrations that required you to tap an icon before speaking your desires. That changes now.

Starting today (July 17), Alexa will be available on the HTC U11 via a free over-the-air update from HTC that rolls out later tonight. To set things up, all you have to do is install the update, tap your newfound Alexa app and log in using your Amazon account.
Lucky for us, we had the chance to check out a preview of Alexa on the HTC U11. And Amazon’s digital assistant worked on a phone almost exactly like you would expect from a first-party Alexa device such as an Echo or a Dot. 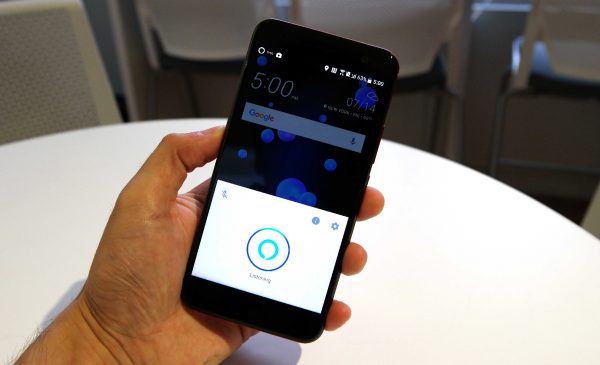 You may be thinking, “We’ll of course it does.” But it’s really a bigger accomplishment than it sounds. Prior to Alexa’s tie-in with the the HTC U11, the best Alexa integration could be found on the Huawei Mate 9, which also had a bespoke Alexa app but with the major caveat that you needed to physically touch an icon in the app before you could speak to the assistant. On the U11, Alexa will even listen you when the screen is off and the phone is locked.
Say “Hey Alexa” when your HTC U11 is within earshot, and Amazon’s assistant will perk up, with all 4 of the phone’s microphones waiting to hear your next command — no touching required. In just a few short minutes, I added a number of things to my Amazon shopping cart, asked about the weather and played a round of Jeopardy with Alexa, all with the U11 sitting on a table on the other side of the room.
That said, if you so desire, you can also set up the U11 to trigger Alexa when you squeeze the side of the phone. This is possible thanks to HTC’s Edge Sense feature, which uses the U11’s built-in pressure sensor as another way to control the device. Functionally, this is the same as touching the Alexa icon on the Mate 9 (which also works on the U11), but it’s always nice to have options. I also like that this adds a little more importance to the U11’s squeezable sides, even if that feature still feels a bit a gimmicky. 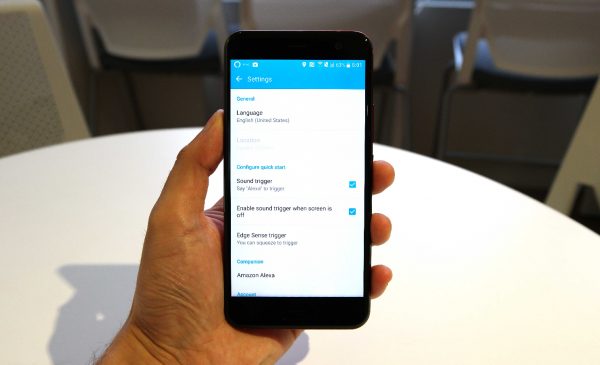 After a few days with Alexa on the HTC U11, my only complaint is that there seems to be a little lag between triggering Amazon’s assistant by saying “Hey Alexa,” and when it actually starts listening to you. I often found myself having to repeat my commands, because the first time I spoke, Alexa wasn’t quite ready to catch everything I said.

So if you’re someone who’s deeply tied into the Amazon ecosystem and looking for a new phone, the HTC U11 now has to be one of your top contenders. And that’s just fine, because the U11 was a pretty great phone even before the Alexa integration. Instead of setting up an entirely new device in your kitchen or living room, you can get the same features of an Amazon Echo or Dot on the one device you carry around all the time. Having fewer gadgets to worry about isn’t a bad thing.