Residents, motorists and commuters from various parts of Ughelli town have continued to lament the deplorable state of the roads in the local government headquarters which causes them untold hardship on daily basis.

Journalist that has been monitoring some streets in Ughelli town, and which serves as link to other communities can authoritatively report the hardship residents undergone as the roads are in worse condition.

For instance, the Uduophori road, which is directly opposite the Ughelli Kings Palace, is in a pitiable condition. The road serves as a link to the ever busy East-West road, and also connect Oviri-Ogor town, and other neighboring communities in Ughelli South Local Government Area.

The importance of this road is inestimable, as it helps to reduce traffic at the popular Otovwodo Junction. Commuters coming from Port-Harcourt, Bayelsa often bypass the ever busy Otovwodo junction and market, and use this road as an alternative to avoid long stay in traffic especially on weekends.

Residents of Daniel Umukoro Extension, Robert Alor Street and others in that axis, are counting their losses daily. They expressed bitterness over the state of their street and what they called, ‘I don’t care’ attitude of the Council Chairman, Chief Hon. Godwin Adode and even the State Governor, Ifeanyi Okowa.

A resident who only gave his name as Jacob, told this reporter the hardship residents encountered on daily basis. Pointing at a Toyota Camry Stationed in a compound probably for some months, disclosed that this is my car. I visit the mechanics almost every day, and it got to a point I decided to just park it there, all because of this Robert Alor Street.

Continuing, he said, from the White House here to Akpobome Estate inside, and back to Up Agbarho Street Extension, the story is the same. No drainage system, and no roads. So we just accept our fate, whether its rainy season or dry season, the story remains the same for us. He however called on the Local Government Chairman to create out time to personally visit the area for personal assessment of what they pass through daily. 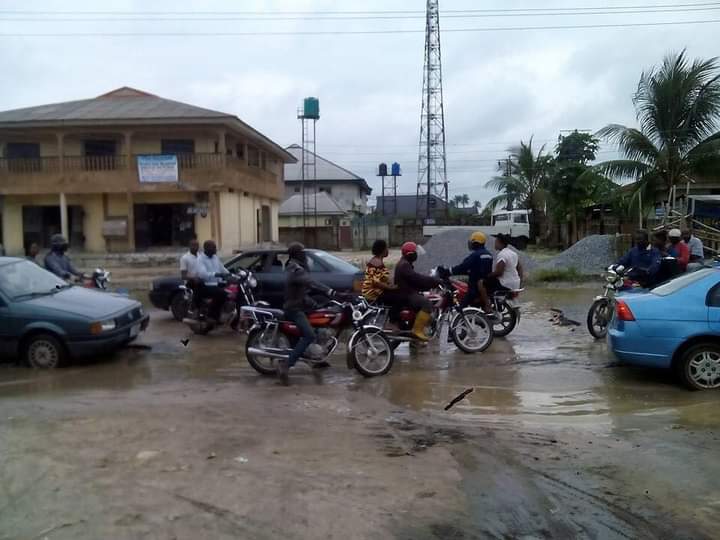 A scene at Makolomi street ending in the Otovwodo Area of Ughelli on Wednesday, May 26, 2021 witnessed by this reporter calls for immediate attention of the government. It was at about 3:30pm, students were returning from school, when a heavy rain began. The failed portion of the Makolo Street was flooded as both drainage system has collapsed.

A parent was rushing down to pick her kids from school, but due to the flood that submerged the road, not knowing which part of the road to follow, veered out of the road and fell into the drainage. It took the efforts of this reporter who was behind her car and other good Samaritans who undermined the heavy rain to assist the lady who was already in shivering and in a state of confusion, to pull out the vehicle even as they were drenched.

Whenever it rains, that axis of Makolomi/Onoharigho Streets are terribly flooded that one is scared for children either going to school or returning from school.

Residents are also lamenting the difficulties resulting from the dilapidated state of the road as it affects their system. Some residents that spoke to reporters, said; the bad state of the road had made commuting unbearable for road users and customers, adding that businesses in the area had collapsed as customers now avoid taking their route.

It has been observed that whenever it rains, water covered the road, while a good number of shop owners in the area finds it difficult to cope due to lack of patronage. Residents and business owners in the area are alleging that the local government chairman has abandoned them.

Also, residents of Ughwe Street are lamenting the abandonment and nonchalant attitude of the government in monitoring projects that has bern awarded. They claim Ughwe Street in the Otovwodo axis of the town has been awarded severally but after grading, the contractor will abscond from site.

A resident in the street who gave his name as Mr. Daniel Ejovwo, a furniture maker, said the road had been abandoned for over five years, adding that in the thick of every rainy season, residents and business owners usually experienced more hardship. He said even in the dry season, the street is also not motorable.

In his words; ‘The road has really affected us, and it has been like this for the past five years. The street residents usually makes efforts once in a while to make the road motorable but to no avail. When we are coming home from our businesses in town, most time we goes through Evueta Street down to Onoharigho Street, but complained that those roads are also begging for immediate construction and repairs presently.

“During the rainy season, people living around Ughwe axis usually pass through Evueta, Makolomi, and Onoharigho Streets to get to their homes, abandoning where most stores and shops in the area are located. How will our those business owners grow? Business activities along this axis have been paralyzed.”

Another residents who deals on eggs business laments and count her losses on how she damaged her number of eggs in the process of transporting them from the farm to her home; this she attributed to the dilapidated state of the road.

A Keke driver, Emmanuel Eke, an indigene of Agbarho but resident in Ighagbomi Street, who spoke with Southern voice news, said the road both at Ighagbomi Street, Otas Close and Makolomi Street was not suitable for motorists, describing it as an axis currently being ruled by potholes. He said that most roads in the local government council headquarters were in terrible conditions.

Another road that also calls for immediate attention of the local government chairman is the Emorutu-GRA road. That is one of the major road to link the Central Hospital Ughelli, Oteri Community and other local governments like Ughelli South, Otor-Udu, Uvwie and Warri. The last time the road was repaired was during the first tenure of Chief Hon. K. Ibru as the local government chairman. But the road could not face the rest of time due to its importance and usage. For instance, during the #EndSARS protest, when the Ughelli ‘A Division of the Nigeria Police barricaded the road, Emurotu Street was the only alternative to residents and commuters. Even the Akpodiete Junction, Afiesere road, and Olori roads, if urgent repairs is not carried out, will also become a gory scene in no distant time.

At Ekuigbo Community, the story is the same as Imohwe street and other adjoining streets residents are also lamenting the litany of years that they have suffered. They called on the State Government, the local government chairman to assist them through the Ministry of Works, and intensified efforts to construct all failed streets across the local government and repair dilapidated ones.

It is believed that the only thing the average citizens can benefit from either the local government or state government, is provision of infrastructures such roads, pipe borne water, electricity, good health facilities, schools and security. The idea of the creation of the local government therefore, is to reach out to the grassroot, but a situation where such responsibilities is neglected grossly, the masses feel betrayed.

However, this reporter can authoritatively state, that most of the problems faced by residents is as a result of poor building plans. Water channels are blocked while drains has been filled with debris and dirt dumped callously without caution by residents.

Moreso, local government chairmen need to be more proactive in their roles as leaders, especially by preparing against for seen disasters. Canals and water channels that needed to be cleared, should be done without waiting for the worst.

Though, the governor, Ifeanyi Okowa has been so much celebrated by party members and boot lickers and has been nicknamed ‘Road Master’, but his lieutenants at the local council area has done very little or nothing in this regards. It is about time, if truly the governor is sincere with the local government allocation, will call all his local government chairmen and ask for accountability.

The masses are tired of lip service by sycophants, who are selfish and greedy.
The masses are tired of local government chairmen buying a trip of asphalt in only God knows amount and pour on roads and ask his or her media aides to take photographs and flood the internet with same claiming to have done so very well, but in the real sense has done nothing. We call on those in the helms of affair, to endeavour to live behind legacies and we also challenged residents to imbibe the habit of maintenance as only the government cannot do it all.