Skip to content
By Joel Grandball
The Chief Executive Officer and President of Peters Mission for the Less privileged, Mr. Peter Smith Onoriobe bagged of Excellence from ‘Ughelli Hall of Fame’ for his continuous humanitarian services to mankind most especially the less privileged.
Peters Mission for the Less Privileged is a Non-Governmental Organization that has been donating relief materials, Food items to widows, prison inmates, and awarding scholarships to students and the physically challenged persons irrespective of tribe and political affiliations over the years.
According to the organizer of the event and publisher of Ughelli Times Magazine, Prince Daniel Ekuigbo, “Awards by this body are given based on the conviction that the recipients have touched lives in positively in whatever situation they find themselves.
And we have been following some of the precedents of Mr. Peter Smith Onoriobe on how he has been putting smiles on the faces of the less privileged within and outside the country and the development of Ughelli his immediate environment.
“The Ughelli Hall of Fame award is the recognition of his Humanitarian services and socio-econmic development of Ughelli nation and humanity at large”.
On his part, the awardee, Mr. Peter Smith Onoriobe said, “With this award, we will continue to do more and our best for the society and the less privileged. 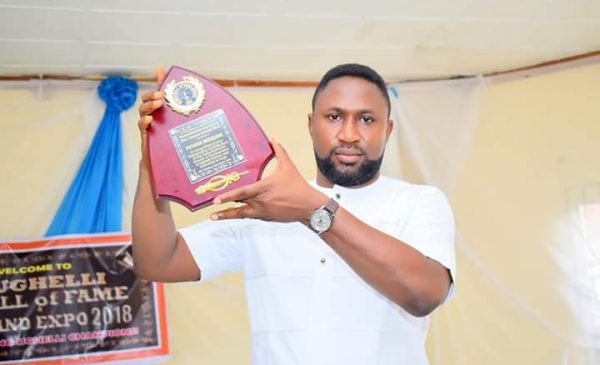 “The Peters Mission for the Less Privileged has touched millions of lives around through its scholarship, Free medical care, donation of educational materials, food items Police Widows and prisons inmates and many others.
While appreciating the organizer of the event, Onoriobe said, “The honor bestowed on him is a way of encouraging him to contribute more to save humanity as the sole aim of the mission.
“This award is dedicated to God Almighty and the less privileged people around the universe and we have reinstated our commitment to the welfare and restoring hope to the  hopeless and give them sense of belonging”. He assured
Post Views: 51