The executives of Olomu ward 1 PDP in Ughelli south local government area in a meeting of the Executives on 29th March, 2020 passed a vote of no confidence on Chief Milton P Ohwovoriole over what they described as betrayal of trust and abuse of power.

According to the Executive, “It is an aberration for Chief Milton Ohwovoriole SAN, whom the ward have so much regard and respect for to had single handedly used his position as Olomu ward 1 leader to elect a stranger, Chief Okiemute Oviri from Okwagbe ward in Ughievwen kingdom to represent him on behalf of Olomu ward 1 in a high powered PDP meeting of the 11 ward leaders in ughelli south.

In as much as we respect Chief Milton P Ohwovoriole SAN, we will no tolerate him nominating a total stranger from another ward to represent our ward in any party meeting as if outside him there are no other competent party faithful from the ward that he can delegate to represent the ward in such meetings.

His action to the ward has ill- motivated agenda to the disadvantage of our ward.

To this end, the Olomu ward 1PDP executives do hereby suspend the leadership of chief Milton P. Ohwovoriole SAN, pending when he give satisfactory reason or reasons to the disciplinary committee set up on why he sent the stranger to represent the ward at such a high powered critical stakeholders party meeting. 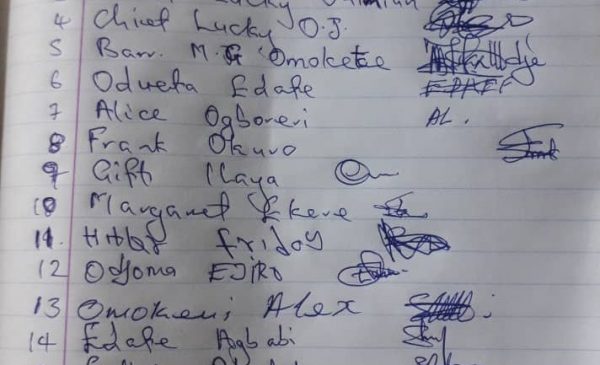