Skip to content
By Omoghene Benedict,
THE newly elected 17-man executives of  Afiesere community in Ughelli North local government area of Delta state, have been sworn-in with Mr. Richard Ovwreghederohwo also known as Aduvie as president.
This is just as the President General of Ughelli Descendants Union, UDU, Chief Pius Omubaye has charged them to focus on the speedy development of the community
Members of the executives also sworn-in are: Olorogun Shikaleke Okiemute, Vice President, Mr. Lucky Oleya, Secretary General, Mr. Matthew Otuokena, Treasurer, Mr. Lucky Ikporo, P.R.O, Mr. Philip Ukpokpo, Asst. Secretary, Mr. Joseph Odoko,Organizing Sec, Mr. Sunday Igbudu, Fin. Sec, Mr Francis Obire, Internal Auditor, Mr. Attwood Obire, Ex-Official, Mr. Ovuoke Eghwrudjakpor, Ex-Official, Mr. Anthony Ejovi, Ex-Official, Mr Daniel Oshebinama, Ex – Official, Mr Gabson Iloloje, Ex – Official and Mr Augustine Emosivwe, Ex – Official.
The community while swearing-in the new executives, advised the new exco under the leadership of Mr. Richard Ovweghrederohwo aka Aduvie to be good ambassadors of the community by providing enabling environment for both indigenes and non indigenes alike, pointing out that they should embrace mutual relationship in their course of serving the community.
In his acceptance speech, Mr. Richard Ovweghrederohwo commended the out gone president, Mr. Victor Otumemine who during the period of the electioneering process provided enabling environment for the election and the Electoral Committee Chairman, Mr. Thomas Ezewu for a hitch free election.
We will run an open door policy in this administration which will gives room for constructive criticism that will bring rapid development to Afiesere community and other residents whom are not indigenes.
He promised to ensure that his administration will ushers in peaceful co-existence among members of Afiesere community and said that he will never disappoint the community over the confidence repose on him as the new president of Afiesere community.
The out gone President, Mr. Victor Otumemine who spoke to newsmen on the successful election and swearing-in, thanked God Almighty, the electoral committee, the security agents and other members of the community for peaceful election and supports given to him throughout his tenure, advising the new executives to ensure that the well being of the community should be their watchword and utmost priority.
Omubaye in his speech, charged the newly inaugurated executive not to use their personal bylaws to rule the community but the community constitution with transparency. 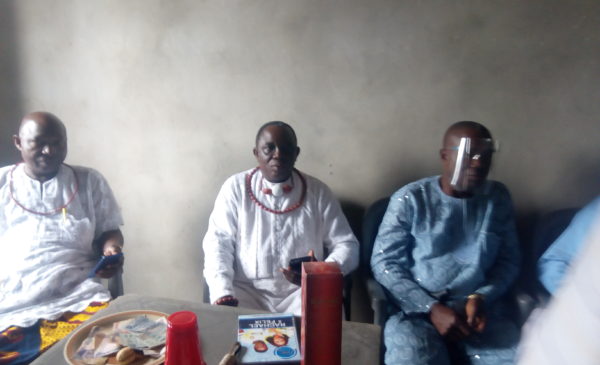 He said, “Community position is a call to service, their respective position is not an employment opportunities but to work wholeheartedly to bring development to the community and there is the need for them to carry everybody along in the scheme of affairs”.
Post Views: 110