Skip to content
By Joel Grandball
The chairman of Isoko South Local Government Area, Sir, Itiako Ikpokpo, his wife, and the president general of Isoko Development Union, IDU, Chief Iduh Amaidhe have been honored with traditional titles from the Odiologbo of Irri kingdom, HRM, Joshua F.E Aghagba,
Omathovo I, in commemoration to mark his one-year coronation anniversary.Ikpokpo was honored along with his wife as the Atanaru, his wife, Oni Iroro while IDU, president Iduh Amaidhe was honored with the Omanufogho both of Irri Kingdom.
Speaking on the occasion in his palace at Irri, Isoko South, the centenarian Royal father disclosed that Itiako Ikpokpo and chief Iduh Amaidhe are worthy sons of Isoko nation and I am honoring them because of their leadership qualities which has brought absolute peace to
Isoko nation and I am satisfied with their achievement“God has honored me with longevity and I will be one year on the throne since I was given staff of office. I am satisfied with that and with those who has contributed to the success and I am appealing to all sons and daughters of Irri Kingdom and Isoko to remain peaceful”.

On his part, the chairman of Isoko South, Ikpokpo while appreciating the monarch, said, “We want to sincerely thanked the Odiologbo of Irri kingdom for the honour and privilege done us today.

He said, “One good thing about administration is that for one to have
peace, there must be justice because it is the only thing that can bring peace and by the grace of almighty God in this my second term our manifestoes was and cardinal point was that, there must be peace. 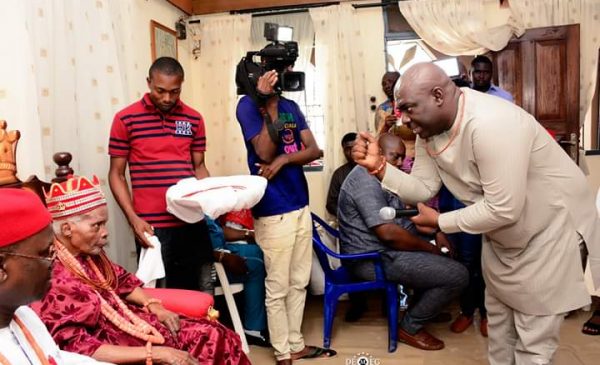 “There is peace in this kingdom because we are trying to do what is right and Irri people must realized that they are the largest community in Isoko from land to water and so must show good example of leadership to others and I believed that with your emergence as the Odiologbo of Irri Kingdom, the community has entered its place of rest.

“But we must realize that the responsibilities of chiefs and Odios are
to correct whatever that has gone wrong and chat the part of progress in our communities.

“I will not allow it for someone to hold a community to ransom because of selfish interest, he warned.

“We need to sit together as a family and tell ourselves the truth, and the way to move forward, then God will give us the wisdom to move our kingdom forward”. Ikpokpo said.