November 6, 2021 was meant to organize a climate action globally. Community Development Advocacy Foundation (CODAF) and African Centre for Environmental and Rural Development (ACERD) hinged on this to carry out a sea-side action to monitor, report, engage and expose (MORE-E) decades of climate and environmental crisis committed against the indigenous people of the Niger Delta (especially those living in the creeks) by Shell, AGIP, Chevron and a host of other extractive industries. The action which kicked off at Odimodi community terminated at the sea-side of Okuntu and Ibabebe communities with a rally.
Feedback from the action revealed that Shell is yet to carry out a proper cleanup of the oil spill that occurred in 2018 at Odimodi as the oil is still visible in the community. Shells effluent discharge point was discovered at Okuntu community. 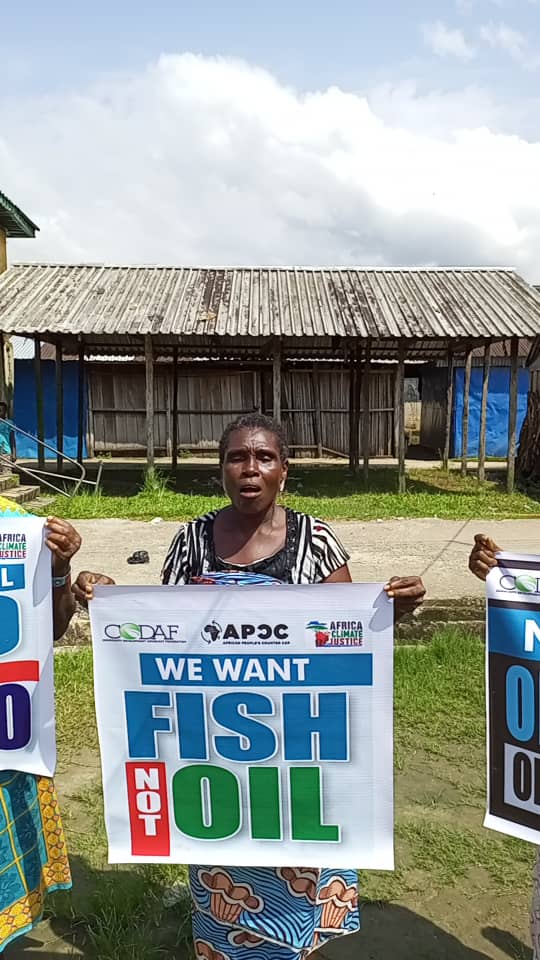 Flagging off the action the executive Director Benin Richard informed the community that the aim of the action was to strengthen the resilience of the suffering host communities in the Niger Delta and to also propagate their demands to concerned bodies. The effects of climate change could be devastating to vulnerable coastal and marine areas as well as to the function and structure of their ecosystems. He said the increasing sea level changes the shape of coastlines, contributes to coastal erosion and leads to flooding and more underground salt-water intrusion and wiping out of communities by the sea side like what we are already seeing at Forcados and Okuntu communities.

Receiving the team, the Vice chairman of Odimodi Community Godgift Egberibo said the meeting was very significant to their plight while the Secretary of Okuntu community Mr Monfort Mebilanje said the engagement became an eye opener and an opportunity for them to tell their stories to the world.

Other respondents in Odimodi community also confirmed that Oil and Gas activities over the years have created astronomical depletion in the regenerative biodiversity of the ecosystem. Thus a single farming venture of periwinkle which would have yielded about 600kg per household a decade ago yields less than 50kg. Also the same depletion has affected crop farming in the communities. This was brought about by lack of proper remediation of the spill impacted environment in the communities. 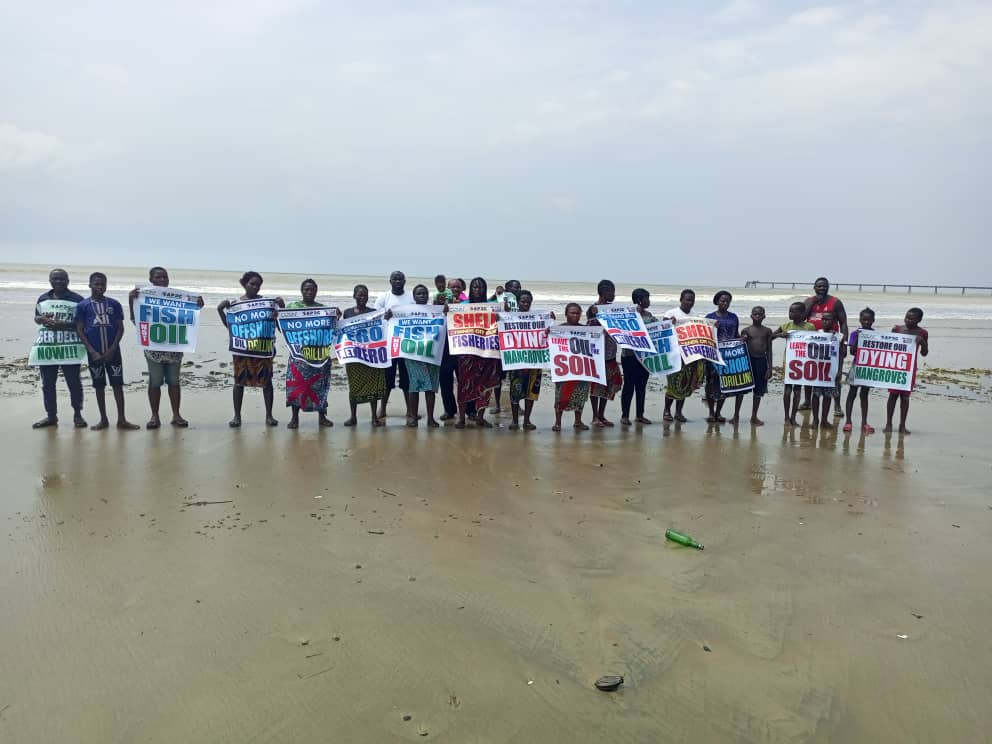 While both communities share the same environmental and ecological crises, Okuntu is situated along the Atlantic shore line with the entire community being threatened by coastal erosion.
According to the fisher folks in Okuntu community, fishing activities has been made difficult due to the regular discharge of effluent from Shell’s facility into the ocean and the industrial fishing activity by unidentified companies. The fisher folks complained that the effluent discharge alters the natural water chemistry of the ocean which affect fishing activities and the destruction of fishing gears by unidentified fishing industries. The Okuntu community is gradually disappearing due to rising coastal erosion that had in the past washed off part of the community.

Both Odimodi and Okuntu communities affirmed that there is a lack of government presence in the community as all the promises made by the government to them as way of cushioning the effects of the oil pollution on the livelihoods and the health of the members of the communities have not been kept.

Fred Nohwo of ACERD warned that if offshore oil drilling activity is not discouraged, owing to the numerous environmental crimes being committed that are often covered up by the oil industries like Shell as most spills by the oil industries are immediately dispersed without recovery and cleanup.

CODAF team and the communities demanded that the oil industry should commit to real zero and not net zero which they said is the foundation in addressing all the climate and ecological crisis globally. They urged Nigerian government and the oil industries to clean up the Niger Delta and Restore the mangrove ecosystem, government declare a state of emergency in the fishing sector. And that the Niger Delta oil should be left in the soil, while shunning offshore oil drilling.