The final set of opening group fixtures in the 2019 Bet9ja Royal Cup recorded its fair share of drama on Wednesday, October 16, 2019.

Bobbies United underlined their quest to win the competition when the traditional team put the Academicians, Sundof Academy of Oleh, to the edge of the sword in a 3 – 1 triumph in a Group A game at the Agbor Township Stadium.

The sizeable crowd at the Kwale Township Stadium were denied the opportunity of witnessing the battle of youth and experience, as Ede United players allegedly refused to travel for their Group D fixture against the Maro11 Speedstar Academy. 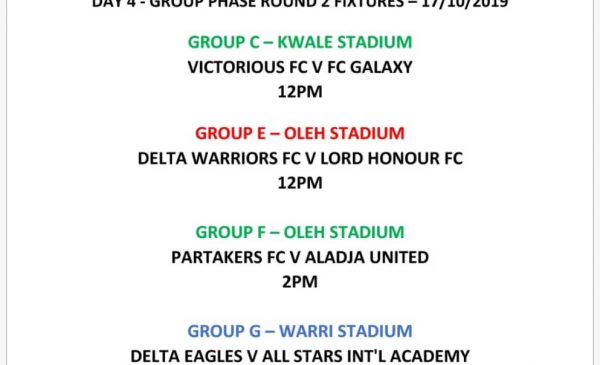 Three goals and three points were subsequently awarded to Maro11 by way of a walkover over Ede United, consequently leaving the youngest team in Delta’s premier grassroot tourney with an average age of 16 on top of the group.

The first set of Matchday 2 group games will hold on Thursday, October 17, 2019 in Groups C, E, F and G respectively.

Agbor-based side, Partakers FC, will go in search of their first victory in Group F, when they take on Aladja United by 2pm at the Oleh Township Stadium.

The Warri City Stadium will host the tie between Delta Eagles of Ozoro and All Stars International FC by 10am.