Skip to content
Chief Askia Ogieh the Managing Director and CEO of Delta State Oil Producing Commission, has received an award of Performance from Civil Society Organisations for his humanitarian approach to governance and leadership qualities.
The groups, Centre for Peace, Transparency and Accountability together with Civil Society Groups for Good Governance, (CTPA) with Civil Society Groups for Good Governance,  were repsented by its Executive Director, Patrick Ogheneyore and his executives and Comrade Ogakwu Dominic for the Civil Society Group for Good Governance.
Presenting the award on Tuesday to the DESOPADEC boss at his office, CTPA Executive Director, Patrick Ogheneyore disclosed that the award was to acknowledge his, (Chief Askia) track record of excellence leadership and humanitarian approach to governance. 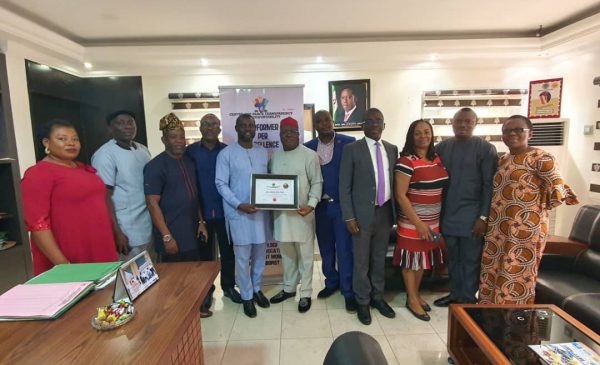 Also speaking, the Civil Society Groups for Good Governance, president, Comr. Ogakwu Dominic said they had not come to present the certificate of performance to the MD/CEO of DESOPADEC, simply because he was the MD, but because they had kept track of his exploits over the years and determined that he deserved the honour.
According Dominic, “The certificate was to encourage the MD to up his game, as well as to encourage him to use technology to bring positive change to DESOPADEC, as an ambassador of good leadership and a proven strategist.”
He specially thanked the MD for being an outstanding leader and promised to stand by him throughout his tenure as Managing Director/CEO of DESOPADEC.
Accepting the award, Chief Askia lauded the recognition given to him by the groups and the lofty award of excellence embedded in the certificate of performance issued him.
Chief Bashorun Ogieh who recalled the  initial frosty relationship between Civil Society Groups and the Board of DESOPADEC has now developed into a cordial one.
High point of the event was the presentation of the award to the DESOPADEC Boss amidst funfair.
Dignitaries present at the event are, DESOPADEC Executive Director, Social Services, Leonard Anoka, Executive Director, Planning Research and Statistics, Amb. Shedrack Agidiga, DESOPADEC Management Team, HoD Finance, Louis Ajieh alongside his media and public affairs counterpart, Mrs Chinenye Ezonfade.
Post Views: 46