A new social political pressure group, Delta Central Equity Group, DCEG, comprising Urhobo and Isoko youths in Delta State have called for equity and justice among the three senatorial districts in the forthcoming elections in 2019 as they endorsed Governor Ifeanyi Okowa for second tenure.

The convener of the group meeting, Morris Idiovwa who spoke at Ughelli, the the headquarters of Ughelli North at its debut said, “Delta Central Equity Group, DCEG, is an amalgamation of youth group within Delta Central Senatorial District who are wholly dedicated to the principles of equity and justice within the governing framework and structure of Delta State.

According to Idiovwa, “One who seeks equity must do equity and DCEG will be mobilizing Urhobo to ensure that what is due Delta North is fully delivered to them as an equal co-stakeholder in the ‘Project Delta’.

“We will not allow ourselves to be used as cannon folder to forment trouble, we shall be achieving this by ensuring that the coming elections are peaceful and violence free, especially governorship and state House of Assembly.

“Delta Central must be peaceful before, during and after 2019 election and the least way Urhobo and the rest of Delta State can give their Delta North brothers an adequate sense of belonging, solidarity is to ensure that the order of rotational arrangement as regards to who leads the state is not broken, which translates to the governor from that part of the state.

“Dr. Ifeanyi Okowa should be allowed complete the two term due his region and that will be equity and will be justice”.

“From 1999-2007, Chief James Ibori from Delta Central was the governor of the state for 8years, and 2007-2015, Dr. Emmanuel Eweta Uduaghan from South ruled for another 8years, now it is the turn of Delta North and Okowa should be allowed to complete the two term from 2015-2023 for the sake of equity and justice.

Warning against any electoral vioence that may occur in 2019, Idiovwa disclosed that, “There is an ongoing grand campaign of implied, explicit threat of violence, exclusively in Delta Central during the forthcoming gubernatorial /House of Assembly in the state by one of the major opposition political parties to achieve anything pre-determined anti-democratic goal of inconclusive election. 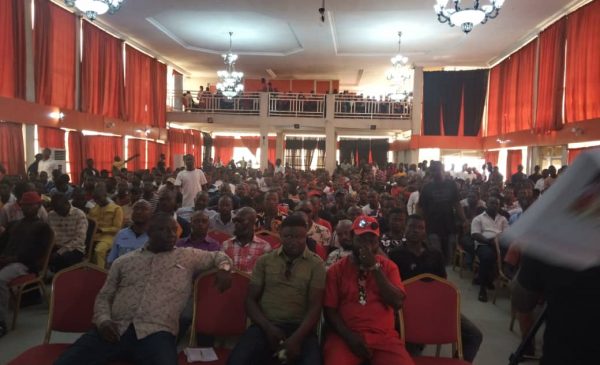 “There are also the openly plans to deploy unrestraine use of federal security forces during elections and plans to turn Delta Central Senatorial District into a theatre of war so as to gain the plan of an inconclusive election.

“But the youths of Delta Central under the banner of Delta Central Equity Group,DCEG, wholeheartedly reject any and every attempt by narrow-minded and wicked ethnic irresidents to show chaos within our district to achieve their evil goals.

“We will fiercely resist any attempt by foreign political merchants or gang to turn our district into theater of war to achieve their goals.

Delta Central Equity Group shall always work with the twin attributes of justice and equity in espousing our vision. We stayed our readiness and resolve to work with all security and the Independent National Electoral Commission, (INEC) to ensure all peaceful conduct of election”.

Also the vice president of Isoko National Youth Council, INYC, Comrade Paul Agbama held that the Isoko youths are behind their Delta Central counterpart to support the candidature and return of Dr. Ifeanyi Okowa in 2019 to complete the second tenure of Delta North for equity and justice sake”.