Tension is currently brewing in Ukpiovwin community in Udu Local Government Council of Delta State as assets donated by the Federal Government and Nigeria Petroleum Development Company, NPDC are reportedly sold by some of the community leaders.

It was alleged that the executive of the community led by one Mr. Fredrick Ighoshemusua had sold items worth millions of naira and upon inquiry by concerned citizens, a chief from the community was banished.

According to sources, Mr. Ighoshemusua had allegedly sold items which includes, galvanized steel tower and giant water tank, a Federal Government social scheme service to amoriate water scarcity for the community and 14 giants refrigerators donated by the Nigeria Petroleum Development Company (NPDC) amongst others.

The chairman of the community Mr. Ighoshemusua who confirmed the allegations and sales of the items said, “the properties were sold to finance community projects and upkeep of the community executives and nothing has been done saying;although, no visible project is ongoing but internal”

Also, a notable leader in the community, Chief Djebah was excommunicated for his un-forebearing attitude of questioning community leadership to account for the sales of the items donated to the community.

Chief Djebah, Ukpiovwin Progress Union, Warri branch and others through their Solicitors O. J. PIPPAH & CO petitions the community chairman over the alleged missing items and requested him to give account of missing facilities to the community.

The petition signed by Chief Luke Djebah president and Major Matthew Utiri, rtd, demand unbiased explanation to the indigenes of the community, the disappearance of 14 giants refrigerators donated to the Ukpiovwin community which was under your care. 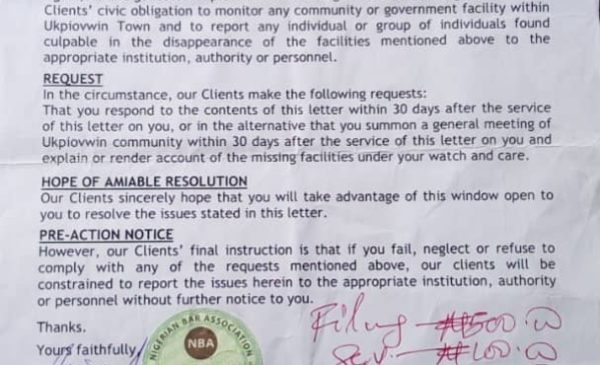 “The dismantlement and removal of water tank and pumping machine also donated by the federal government of Nigeria to provide portable drinking water to the the community and it’s environs.

Chief Djebah, member of Udu Traditional Council and Justice of the Peace, lamented the alleged cruelness of the Community Chairman to deprive his own people social amenities and his lordship over the people.

“I was excommunicated from my own community by some set of persons because of the inquiry from the chairman and his cohorts. This action will not discourage us from doing that which is right in the eyes of the law, and community. Djeba reinstated.

When contacted, Ukpiovwin community chairman, Mr. Fredrick Ighoshemusua disclosed that the items in question were sold out to facilitate other projects in the community and for the up keep of the executive members. We have not embarked on any tangible projects but it’s an internal issues.” He said.