Bashorun Askia Ogieh is a man of many parts whose political profile and antecedents in every respect leave no discerning mind in doubt where he derives his powers from. For many, he is a consummate politician whose stratagem cuts across the politics of all ages. He is a man who is not given to a particular lifestyle, his leadership style and approach to issues and policies are as dynamic as they come.

The Udu of Isoko nation, a man who is in tune with the traditions of his people took the gauntlet of leadership from the outset. His ability to galvanize people conferred on him the rare privilege of becoming the king of grassroots mobilisation which he accomplished through a combination of discipline, hard work, purpose and providence.
For a man like Bashorun Askia whose leadership style has affected humanity positively, especially in Delta State and the Niger Delta region, every September 12th is a thanksgiving day, a day of praising the Almighty God for gifting him to his people.

He holds the professional qualifications of: Fellow, Chartered Certified System Accountants (FCCSA), USA; Member, The Institute of Certified Public Accountants in Ireland; Fellow, Nigeria Institute of Personnel Management;, a Certified and Licensed Forensic Accountant and Fraud Examiner with the Society For Forensic and Fraud Prevention (CrFA); Masterclass Certificate in Business Management and Leadership from the London Graduate School; Fellow, International Institute of Professional Security (IIPS) and Doctor of Corporate Governance and Leadership (Honoris Causa), Commonwealth University (City of Panama), among others.

Emboldened by his resolve to overcome impediments associated with the younger generation and break economic encumbrances, Bashorun Askia chose a career in banking having earlier had stints at NTA/NTPC, Lagos. His sojourn in banking spanned over a decade. 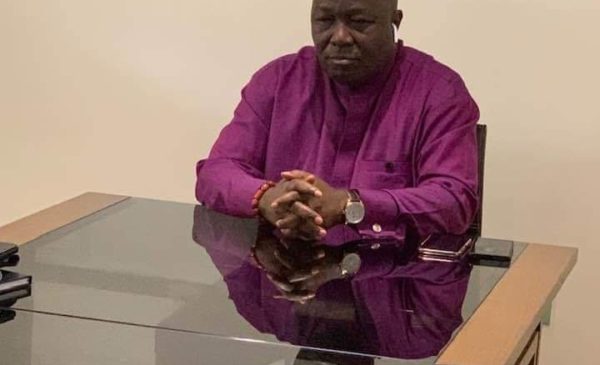 His experience in banking and exemplary footprints at First Bank Nigeria Plc, where he rose through the ranks to become a branch manager before exiting the industry shaped his resoluteness for accountability and prudence in resource management.
Bashorun Askia’s venture into banking gave him the opportunity to acquire extensive knowledge and skills through local and international courses in various financial programmes. While in the banking industry, he was an active member of the Executive Committees of Association of Senior Staff of Banks, Insurance and other Financial Institutions (ASSBIFI) and the National Union of Banks and Financial Institutions Employees (NUBIFIE). He was also at one time Exco member of Radio Television Theatre and Art Workers Union of Nigeria (RATTAWU).
His foray into Politics.

In 1997, Bashorun Askia contested for the House of Assembly seat to represent Isoko South under the platform of UNCP during the transition era of the Military regime. During the period, he founded the grassroots based social political group, Hope 97 (now renamed Hope Alive). In 1998, Bashorun Askia was one of the founding members of the Peoples Democratic Party (PDP) in Delta State.
There is no doubt that the Awhotu of Erowha Kingdom has been at the forefront of grassroots mobilisation for the development of Isoko nation, Delta State and the Niger Delta. He will tell you at any point in time that he did not jump from the blues to become a party chieftain; he started as a party man in this dispensation.

As a staunch member of the PDP, his fervour in securing professional growth and development within diverse areas in public and private service placed the leadership of Isoko South Local Government Council on his shoulders as Chairman.

His legacy projects speak volumes of his outstanding performance as council chairman of Isoko South. Under his watch, the thriving Cassava Processing Factory was established at Uzere, pioneering industrialization in Isokoland. At that time it seemed impossible to establish this factory, but with a firm resolve, it turned out like a sanctuary in the whole Isoko nation as farmers from far and near began to use the factory. This singular factory took over one hundred youths at that time off the streets as some of them were trained on how to use pesticides to weed the farms and enhance cassava farming.
Among other of his legacy projects worthy of mention as council chairman of Isoko South were the construction and furnishing of Isoko Unity House (Uwo-Okugbe), the official quarters of the Council chairman and the construction and furnishing of the Legislative Arm Complex.

In his bid to restore the dignity of local government administration in the country for grassroots development of the rural areas, he was overwhelmingly elected as Delta State Chairman of Association of Local Governments of Nigeria (ALGON) and subsequently as National Vice President of the Association. Honourable Askia has remained the National Chairman of the Association of Former Elected Chairmen of Local Governments of Nigeria (AFECLOG) till date.

Being versed in grassroots mobilisation, Bashorun Askia has always been, officially, head of operations for the PDP with the onerous task of delivering the Isoko nation and Delta State to the party in all elections. At all levels of election, he is always involved.

In consideration of his effectiveness and sagacity in decision making process and outstanding disposition in supervising and managing people towards completion of any given task, he was appointed by the Okowa Campaign Organisation as Secretary while serving as member of the Governing Council of Federal College of Education, Obudu. He also doubled as Director of Security and Intelligence Services, Delta State PDP Campaign Organisation. Earlier, he had served as State Director/Liaison Officer, Election Planning/Strategy in 2015.

After the elections, His Excellency, Senator Dr. Ifeanyi Okowa, Governor of Delta State, appointed Bashorun Askia into the transition council of the government of Delta State to midwife the new administration in 2015. Thereafter he was appointed the first Executive Director, Finance and Administration in a remodeled Delta State Oil Producing Areas Development Commission (DESOPADEC) which now has a management team to oversee the day to day administration of the Commission. In 2019 he was appointed the Managing Director and Chief Executive Officer of DESOPADEC by Sen. Dr. Ifeanyi Okowa, a position he currently holds.

Bashorun Askia having traversed the whole wards and communities in Delta State, without being immodest boasts of knowing every nook and cranny of the whole State, and in first name terms with party faithful across the state. The Udu of Isoko nation is a man beyond his immediate environment, loved within and outside Delta State. Little wonder his title recognitions span across the geo-political zones of Nigeria.

In Igboland, he is the Agunechemba Gburu Gburu n’ Iduu Eri Kingdom, a title from the Source conferred on him by His Majesty, Eze Chukwuemeka Eri, the Ezeora 34th/Eze Aka Ji Ovo Igbo Eri, Aguleri, while in Yorubaland, he was conferred with the prestigious Bashorun title by the Oba of Aye Ekiti. Bashorun Askia was also honoured with the title of Garkuwa Matasan Arewa (Shield of the North) by the Northern Youth Council of Nigeria.

One thing of note is that all the titles point towards his real essence of being a grassroots generalissimo, a protector of the people, the galvanizer of people, and many more.

Recently, while answering a question on his large grassroots followership, Bashorun Askia said everything about him is enshrined in the grassroots. He proudly refers to himself as a homeboy having spent the better part of his life among his people.

Even when he sojourned out, he was still in touch with the localities. According to him, he worked very hard within the localities to be in sync with them by getting involved in what the locals do, both in occupation and every other social activity. For a man who forayed for greener pasture outside Isoko land to be so deep rooted with the goings-on in his community, there are lessons to be learnt from him.

On his return, he was regarded differently by his people. They saw him as somebody who had some level of advantage educationally which made it somewhat easy for him to be followed.
He became a leader among his peers; they tagged around him while he gave directions.

He puts it this way: “It added to my social life, I was then able to permeate through every stratum like that. Before you knew it, leadership was entrusted on me. Now, having known that these people believed in me and they were entrusting leadership to me at that early stage, I needed to be able to carry them along properly and that means that I needed to know them personally, no matter how low they may be so that I would be able to communicate with them, because it was key.

“It became part of me that wherever I find myself, I will gather people around me. People just cluster around me effortlessly because they trusted me. Most importantly, I am at my happiest moment when those around me are happy and thriving successfully in their various fields of endeavour.”

Bashorun Askia, an oasis of sort in the enablement genre, proved his grassroots connectedness during the COVID-19 pandemic. Faced with stark realities of want as the pandemic led to the total shutdown of all economic activities, Bashorun Askia mobilised his forces through his foundation, Bashorun Askia Foundation, BAF, to provide palliatives for the people throughout the Isoko Nation. The beneficiaries that cut across all strata of society, include orphanages, market women, artisans, Keke and motorcycle riders, Christian Association of Nigeria, the Muslim community and non-indigenes of Isoko.

He believes that to change human nature is a herculean task. But according to him, “We have to continue as long as we have the goodwill for better productivity.

“The Uzere Kingdom acknowledged the fact that I have this quality and before I knew it, they recognised it in me and conferred on me the title of Udu of Uzere Kingdom. Now when the traditional rulers of Isoko nation, about 22 or more of them, across Isoko North and South, Bayelsa and Ndokwa East came together, I was pleasantly shocked again, because they, in unison, chose that same title of “Udu” and conferred on me “The Udu of Isoko Nation” and this comes with a lot of responsibilities.”

The Man and his many Recognitions
Bashorun Askia Ogieh, a holder of the traditional title of Odio of Uzere Kingdom, was one time President General of the Kingdom twenty years ago.

His rare prowess in community service and development within and outside Isoko ethnic nationality earned many recognitions among which are member, Council of Chiefs, Erowha Kingdom, Okpe-Isoko Kingdom, Oyede Kingdom, Olomoro Kingdom and Umeh Kingdom. He is also the Ose-Emo of Enhwe Kingdom,

In recognition of his huge contribution to human capital development of the Isoko people and his undying love in Youth Empowerment, Women Empowerment, Self-Sustaining Job Creation Initiatives, Infrastructural Development, the Traditional Council of Isoko nation comprising of all the Traditional Rulers conferred on him the revered title of “UDU” (heart) of Isoko Nation.

If prudent management of human and material resources, astuteness, political sagacity and solid developmental projects are the yardsticks with which to measure political success, Bashorun Askia (a grassroots Politician and Mobilizer) is by all standards, the Generalissimo.

Bashorun Askia who is widely travelled, has attended various international workshops and seminars and has received numerous awards both locally and internationally. He is a Justice of Peace (JP) in Delta State; Paul Harris Fellow (PHF) in Rotary International and Knight of Saint John International (KSJI).
Bashorun Askia is happily married to Grace, his jewel and the union is blessed with children and grandchildren.