LONDON — A van plowed into a group of Muslim worshipers as they were leaving prayers at a pair of north London mosques early Monday, witnesses said, in an incident police said had caused “a number of casualties.”

The incident occurred when the van sped off the roadway and swerved onto a sidewalk, which was crowded with hundreds of people who had just finished the day’s final prayers for the holy month of Ramadan, witnesses reported.

In a statement, police said that one person had been killed and that 10 were injured, eight of whom were hospitalized. The two people who were not hospitalized were treated at the scene.

Police said they were dealing with “a major incident” and had deployed extra officers “to reassure communities, especially those observing Ramadan.”

Police said the Counter Terrorism Command will investigate, suggesting they think the incident was a terrorist attack, although they stopped short of saying so early Monday.

Video showed police taking a man into custody, and authorities confirmed they had made one arrest. The 48-year-old, who is believed to be the driver, was apprehended by bystanders and handed over to authorities, police said. There are no other suspects, they said.

The incident occurred near two mosques: the Finsbury Park Mosque and the Muslim Welfare House. The Muslim Council of Britain tweeted: “We have been informed that a van has run over worshippers as they left #FinsburyParkMosque. Our prayers are with the victims.”

Video taken in the immediate aftermath of the incident and posted on social media showed people screaming as bystanders performed chest compressions on one of the injured. Nearby, a man held a bloody cloth to his head. 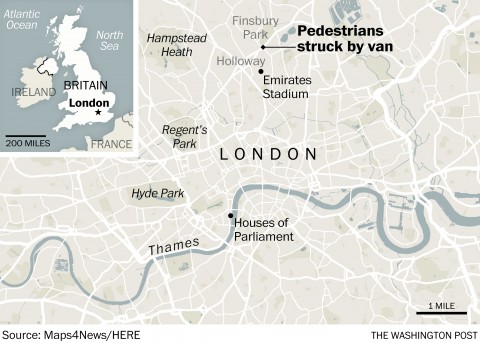 Helicopters buzzed overhead, and ambulances and police cars raced to the scene. The London ambulance service said a “number of resources have been sent to the scene in Seven Sisters Road.”

One woman who said she lives next to the scene told the BBC that she had heard yelling and screeching outside her window.

A man told Britain’s Press Association that the van had swerved suddenly and that he had narrowly avoided being hit.

“People were just conversing, talking, just doing what we’re doing,” said the man, who declined to give his name. “And he just came into all of us. There was a lot of people. . . . I was shocked, shocked, shocked. There were bodies around me.”

He added: “Thank God I just moved to the side, I just jumped.”

Hours after the incident, as dawn broke, a large and angry crowd remained in the streets. Many called the incident a terrorist attack, saying the driver had deliberately targeted Muslims.

Prime Minister Theresa May said the incident was being treated as “a potential terrorist attack.”

Jeremy Corbyn, the leader of the Labour Party said on Twitter he was “totally shocked.”

The Finsbury Park Mosque — located in a vibrant, multicultural area of north London — was once closely associated with extremism. But in the past decade, the mosque has transformed its image, with its leadership outspoken in advocating interfaith harmony.

During the 2016 U.S. presidential campaign — amid the furor of candidate Donald Trump’s proposed Muslim ban — Corbyn invited Trump to visit the mosque to show him how “multicultural, multifaith” Britain works.

The incident early Monday follows two recent terrorist attacks in London in which vehicles have been used as weapons, both on bridges over the Thames River.

Eight people were killed last month when attackers used a van to plow into pedestrians on London Bridge, then got out to stab restaurant patrons with knives at the adjacent Borough Market. In March, a lone attacker drove his car into people on Westminster Bridge, then fatally stabbed a police officer at the gates of Parliament.

In both cases, the attackers were shot dead by security forces.