Nigeria has always been a classic case of the interminable play of contrasts which literary connoisseurs will call irony, oxymoron or paradox depending on the intensity or manifestation. What is apparent from the Nigerian experience since independence in 1960 is that the country has been sustained by a corrosive system of opposites which is lubricated by oddities and absurdities. Nigeria is so endowed, yet so poor.

The citizens are among the most intellectually endowed in the world, yet they are being led by the nose. Her valiant soldiers restore peace in other lands, but they are routed at home. The nation produces crude oil, yet it imports petrol. The country calls itself a federal republic, yet it is unitary in practice. The country cherishes the cognomen the giant of Africa, but in truth it performs like an ant.

It is this system of compelling alignment of opposites that reared its ugly if not provocative head when President Muhammadu Buhari’s son got married to Zahra two weeks ago in Kano. I stumbled on some of the pre-wedding pictures detailing the activities leading to the tying of the nuptial knot and wondered if the fellows were living in our troubled Nigeria or some island of bliss where not a single worry existed.

The marriage event itself did take place and it was simply out of the world and outright insensitive in view of Nigeria’s present ordeal. It was the scale, sickening splendor, repulsive glitz and glamour which attended the wedding ceremony that provoked or inspired a friend to describe the event as “obscene opulence amidst crushing poverty.” Was my friend right? Yes, he was damn too right.

That Nigeria is haemorrhaging is no longer news. The nation is also gasping and in the throes of unimaginable and seeming intractable crises. Terrorism, insurgency, banditry and other heinous crimes have been let loose on our land.

Things are spinning out of control and falling apart. People are being killed daily. School children are being kidnapped, whole communities are being annihilated, economic mismanagement manifesting in acute poverty is birthing hunger in the land, destitution and death are prowling the landscape, social chaos, gloom, mourning, deep anxieties and disillusionment now have the better of the nation. Not even our once upon a time gallant armed forces are safe presently. 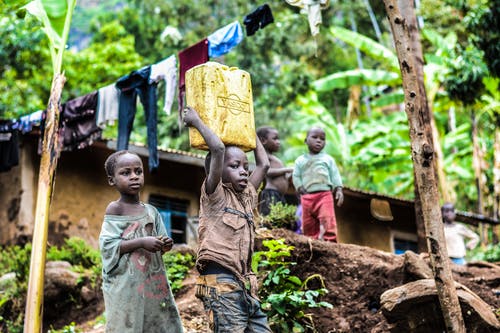 It was in the middle of this unfortunate moment that the obscene opulence of the wedding of the President’s son took place. Let us be clear about one point. Nobody should grudge Yusuf, the President’s son, for taking a wife. He is entitled to that if he chose to. What rankled people were the extravagance and the unpresidential prodigality that the wedding turned out to be in the face of the crushing poverty and severe security problems ravaging the nation.

Yusuf should have had a quiet wedding or even moderate as a demonstration of not just his awareness of Nigeria’s harsh contemporary realities, but also in empathy with the majority of Nigerians who have been at the receiving end of the consequences of the nation’s many failures. The rich and powerful, political and business elite who attended the wedding ceremony not only discountenanced the suffering of Nigerians, but actually danced on the graves of all Nigerians who have died as a result of insecurity and hunger in the last five years. The wedding ceremony was packed full. Political friends and foes showed up, pumped hands and hugged. They laughed and bantered. They had chicken and what not. Choice wine, music and an uncommon showiness dominated the event. Yet, outside there was poverty, destitution, hunger and insecurity. Outside were children without schools. These were lucky for being without schools as many of those in school had been taken into captivity awaiting release after the payment of ransom. Outside were tens and dozens who die on a daily basis. Others hunger and die by installment. Others are killed by the unknown gunmen that have become very ubiquitous, yet mysterious. Their loved ones are crushed, trembling and crouching under the burden of their misfortune.

It was in this dreary and dreadful ambience of national discomfiture that the President’s son had his exotic and expensive wedding not minding that people are suffering, hungry, being killed and their relatives mourning. The bigwigs who attended the wedding suspended reality and for that moment lived in a fairytale world as they yodeled, capered and cavorted while Nigerians groaned. The quantum of money spent on the event will only be in the realm of speculation and this could be in billions. This is an assault on our sensibilities. Besides the drinking, eating, dancing and other enactments which took place, was the Naira rain which of course is gross abuse of the Nigerian currency.

Nigeria’s penchant for the bogus is quite deep rooted, a kind of my Mercedes is bigger than yours mentality. Hence the bourgeoisie struggle to outdo one other in terms of the scale and magnitude of parties. The premium giving to parties and other unproductive social gesture constitute part of our national crises. If only half of that time was dedicated to thinking, planning and implementation of government policies, Nigeria would have become an Eldorado!

Unfortunately, this is Nigeria and not Eldorado! Therefore things don’t add up here. We simply go against the grain. Questions should also be asked about the source of the money spent on that wedding and the propriety of it. It was simply impolitic and repugnant.

The ruling class has always betrayed Nigerians. Yusuf’s wedding to Zahra is another chapter in that long narrative of betrayal. The ruling class be conscious of the history and the revenge of the poor. The people will not be docile forever.

Their moment of awakening will give no notice in the same way the ENDSARS uprising took the nation unawares. That uprising should have sent a message to those who rule and ruin Nigeria that someday the tide will turn and torpedo the status quo.

Nigeria surely needs a rebirth, a rebirth which will set the nation on the path of sanity and recovery. The people, yes, only the people will ensure that rebirth. Then “obscene opulence amidst crushing poverty” will be confined to the past.