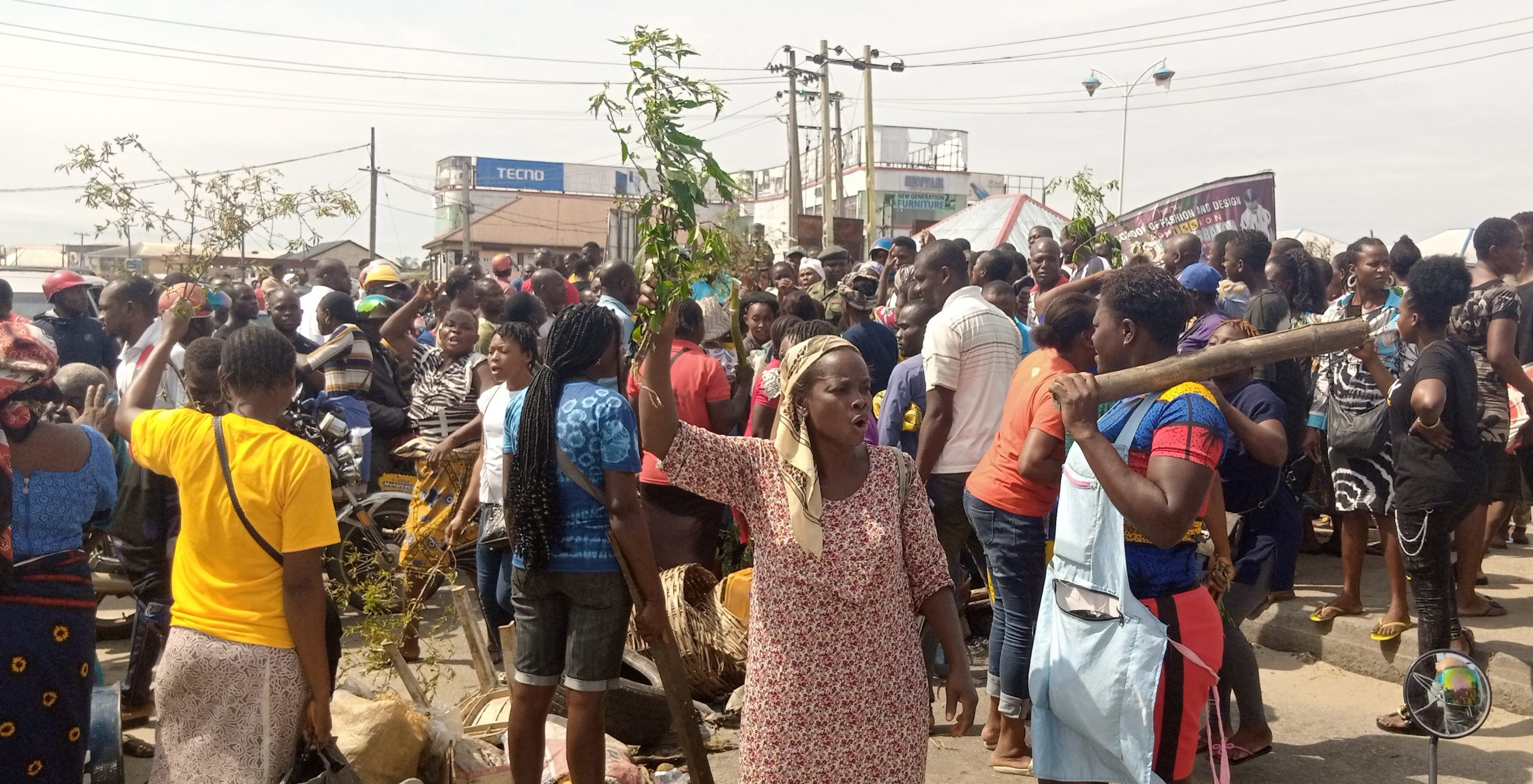 Market women in Otovwodo community yesterday barricaded the East West Road of the Ughelli axis crumbling vehicular movement and commercial activities for several hours over what they described as injustices being meted on them by relocating their market from the community to a nearby swampy bush.

The women numbering over a thousand armed leaves branches appealed to the state governor, Dr. Ifeanyi Okowa to urgently come to their rescue before it will get off hands.
The women who defied the military presence accused the leadership of Ughelli North for deliberately relocating them to an unsafe environment for trading.
Speaking to newsmen a trader who identified herself as Mama Rose Edede said, “Two weeks ago we were chased from our selling spots and they relocated us to Okogbe street where we are ask to pay the sum of N25,000 to acquire a space with two trips of sand to fill the space.
According to Rose, “The local government relocated us to Okogbe street to develop a space of land belonging to an individual in a water logged area, as that is not enough they they were charging us N25,000 per space including two trips of sand for filling the space.
“Majority of the women trading at the Otovwodo market are widows and if you are relocating them to a swampy area with the condition of paying nearly N60,000 is uncalled for and unacceptable.
Another woman, Mrs Solomon Ejiro alleged that the swampy area they were relocated to belong to chief from the royal family; alleging that they are just trying to use us to fill and develop the place and repair it afterwards they will chase us away.
“We want the state and Federal governments to come to our aid because it is like the traditional leader and local government want to kill us. We are petty traders, some of us don’t have husbands, some of us are the ones feeding our families and now they want to stop us from trading. We are appealing to the state government to open the Ughelli/Ogor Modern market for us so that we can go there and sell.”
However, a diver attached to the GIG courier services, Toafeek  who lamented the untold hardship they are passing through because of the barricaded East West Road said, we are coming from Lagos to Port Harcourt and we have been stocked in this hold since 7.am and as you can see it is almost 12.noon now.
“We are appealing to the relevant authorities to intervene so that we can continue our journey. I am supposed to be in Port Harcourt by 12pm and now I am still here”.
Denying the allegations by the protesting women, The Secretary to Ughelli North Local Government Council, Hon. Felix Oderohwo said there was no time the women were asked to pay N25,000.
“We appealing to the women to allow the traffic to flow, promising that all their grievances would be properly addressed.
As at press time the protesting women have refused to open the road for vehicular movements despite appeals from the council secretary and security agents.
Post Views: 100