UGHIEVWEN kingdom in Ughelli South Local Government Area of Delta state was beehive of activities as the Owhawha II, the Okobaro of Ughivwen kingdom, HRM Matthew Ediri Egbi, JP, FoD, marks six years on the throne of his forefathers with thanksgiving to God. 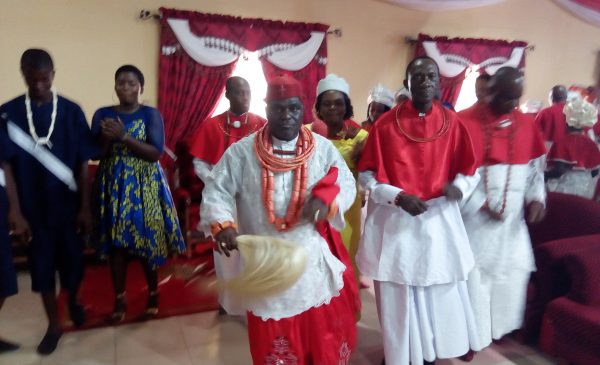 The week-long event was declared open with praises and thanksgiving to God almighty at the royal Hall after which, inter- primary school quiz competition, homage by communities and Council of Chiefs and the conferment of traditional chieftaincy titles on Americans and 13 others.

Novelty football match was held at the Ughelli South stadium in his honour, while lectures on Ughievwen unity and cultural heritage was also held, followed by cultural display on the third and fourth day.

An opened conferment of Godly chieftaincy titles on 15 prominent sons and daughter of the kingdom and well-meaning Nigerians were friends, families and well-wishers trooped to the palace of the monarch for celebration. 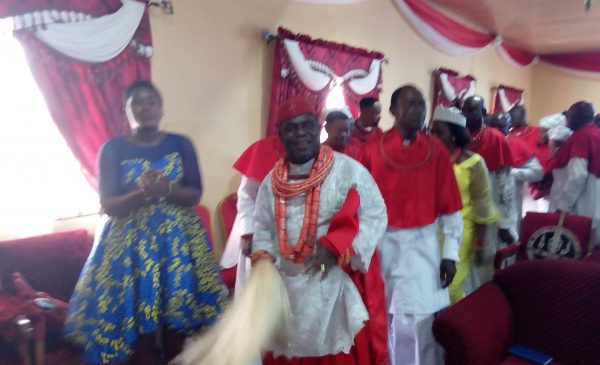 In his opening address, the monarch exalted God almighty for the privileged given him to be a royal father of the kingdom just as he vows to commit his goal to the development of Ughievwen.

He said, “With glory and honour being given to God Almighty, the owner of the universe, I count it a privilege to be the present Okobaro of Ughievwen kingdom and though we are celebrating my 6th year of ascending the throne, in truth we are celebrating Ughievwen people, every descendant of the kingdom because God has brought us together thus far even in the face of challenges and we must remain grateful for the dynamic change.

“I look forward to the resuscitation of the aged long custom of the Ughievwen people which endeared the colonial masters on their arrival in this part of the world, were respect for traditional institutions and constituted authority is held in high esteem because our society recognizes the oldest man, Council of elders with the Otota in the community which the institution is sacred and must be respected for development.

“The peaceful co-existence within the kingdom and our neigbhours cannot be over emphasized and I make bold to state that the olive branches extended to all persons by the palace who are wanting to break and divide the people is yielding fruit, and I will want to use this medium to reach out to all Ughievwen descendants who are aggrieved to retrace their steps to join hands to galvanized the kingdom a heaven for local and foreign investors.”

The monarch commends the Delta state governor, Dr. Ifeanyi Okowa for his close relationship and the support shown to the palace and appointing Ughievwen sons and daughters into his cabinent.

“I will not fail to commend President Muhammadu Buhari for appointing an Ughievwen son, Engr. S. Efeduma as an Ambassador, and Sen. Dr. Ifeanyi Okowa for appointing sons and daughters of the kingdom into his cabinet.

He however appeal to the state and federal governments to establish industries that will boost the economic activities in the area. According to him, “There are no industries here to create employment for our unemployed graduates and youths.

“The natural gas deposits in Ughievwen kingdom has not been fully harnessed and we as a people cannot afford to catch in on the global trend of wooing investors to our conflict free kingdom, but I believe that after this, there shall be massive infrastructural development and the establishment of industries which will create job opportunities for the descendants of the kingdom”.

At the interdenominational service, tagged: ‘Oh Lord Find Me’ the presiding Bishop, Solomon Gbakara who took reading from the Psalm 89, 20-25 said, “The Ughievwen kingdom was without traditional ruler for 18years before God found the Okobaro”.

“It was God that found Okobaro at the right time, because so many were looking at the court and other places, but could not find because it was not at the right time. When the appointed time of God came, we were all happy and that why we are celebrating today.

The clergy appeal to all sons and daughters, at home and diaspora of Ughievwen to rally round the monarch and palace to build a formidable kingdom.

The traditional conferment of chieftaincy title was cut across the four Ruling Houses of Ughievwen kingdom as prominent Nigerians and two Americans were also among the recipients.

While advising the Ughievwen chiefs to live in accordance with word of God and their various titles, the Archbishop of Christ Missionaries Crusaders Church, Archbishop God-Dowell Avwomakpa said, “Our culture is very unique and that is why we are influencing people from the United States of America to take chieftaincy title and our chiefs must not been seen with corruption and thy should know that the title given to them they must live up to it”.