Protesters from Isoko Nation stormed the office of the chairman of Community Development Board, CDB, at Ughelli, Ughelli North Local Government Area of Delta over an alleged award of contract without due process by the body under Heritage Energy Operational Services, an oil company operating in the area.

Displaying placards with various inscription such as, Igbide Community rejects non-due process of 2017 CDB projects, Igbide will not be allowed to be dragged to the mud, Igbide community will not be intimidated by CDB management, Leadership of the community must be consulted for 2017 CDB projects award amongst others described the alleged award of the completion of Igbide Community Cottage Hospital phase two as fraud that lack due process.

Condemning the contract award that lacks due process, secretary general of Igbide kingdom, Mr.  Ogheneovo Joseph JP said, “We are here in protest to register our grievances over the award of 2017 CDB contract in our community without due process. Some days ago, we wrote letter to complain that no contract should be awarded, but our letter was not honored after acknowledging it. 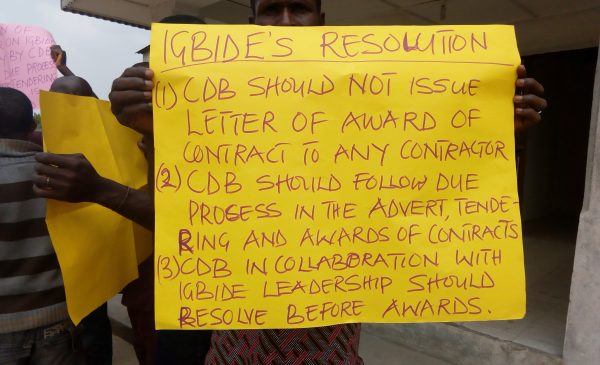 According to Ogheneovo, “There was an enlarge meeting by the community to that effect, and a resolution was reached that the tender for Igbide should be close but to our surprise, the tender was opened and the contract awarded. We are here to register our grievances, that it should be revoked because due process was not followed as the leadership of the community was not involved.

On his part,  the President General of the community, Dr. Patrick Obogho said, “I have never seen it in any community in OML30 where an advert is made for project in its own community and the leadership will not be in the known and the Rep would and pocket it, go away and give it to his own cronies? I have not seen it done, he echoed.

“We came here prepared to stay until the CDB chairman will come and addressed our issue or else, we will not leave here because one single person cannot take the community for granted.

Addressing the protesters at his office, secretary of Community Development Board, Mr. Esibe said, “I want to on behalf of the chairman appeal to you all to temper justice with mercy as the issue brought before us will treated with a matter of urgency. We will try all we could to make sure the matter is resolved amicably.

“The chairman will be in office by Monday and I would want you to come so we can have a roundtable discussion to find a lasting solution to the problem and until the issue is resolved nobody should go to the site and do any job or project.”