The French president, Emmanuel Macron, has named a group of relative unknowns to senior government cabinet posts over traditional allies after a series of high-profile resignations.

As a spokesman announced the names of ministers appointed, political analysts said many voters would be left asking: “Who?”

Four cabinet members have resigned this week after being put under preliminary investigation in two separate scandals, leaving Macron’s prime minister, Édouard Philippe, under pressure to find replacements while maintaining a pledge to maintain gender and party-political parity.

François Bayrou, president of the MoDem party, – allies of Macron’s La République en Marche – who stepped down on Wednesday, was replaced by Nicole Belloubet, a figure almost unknown to the wider public and the first woman nominated to France’s constitutional council.

Belloubet, a technocrat and legal expert from the left, is a former local and regional councillor in the Toulouse region.

Macron appeared to have ditched his centrist allies after two more high-profile government ministers resigned on Wednesday after a month in office. 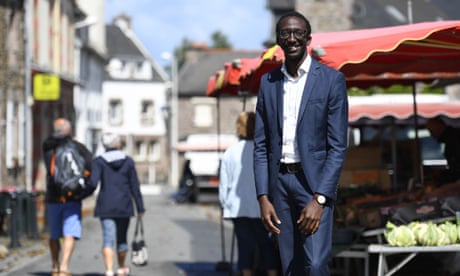 The ministers who quit were from the MoDem party that rallied to Macron during his presidential campaign but is now at the centre of a parliamentary jobs investigation.

It brought the number of ministers to leave the Macron administration to four in just 48 hours.

Macron has insisted his ministers must be morally irreproachable. He has been nicknamed Jupiter, the all-powerful Roman god of heaven and Earth who embodied a sense of morality, obligation and duty to correct behaviour.

Days after a second-round legislative vote that gave Macron a clear majority in the lower house of parliament – even without the support of the centrist MoDem party – Bayrou, the MoDem president, announced he was standing down.

At a televised press conference, Bayrou suggested he had been the victim of an orchestrated smear campaign but had decided to stand down to prevent “the president and the government being exposed to controversy” and “a campaign of lies”. He said he had been to see Macron “two, maybe three weeks ago” to offer to stand down. “I could see very well the way this affair was going,” he said.

Macron has pledged to clean up politics, while MoDem is caught up in an investigation into the misuse of European funds.

Several of the party’s MEPs are at the centre of an inquiry by Paris anti-corruption police for allegations of “breach of trust and concealment of this offence”, concerning whether assistants employed to work for them at the European parliament were used for MoDem party business.

Bayrou denounced what he called a “society of perpetual and universal denunciation” and insisted he and his party could prove “there were never any fake jobs”.

“In another era, France was the country of anonymous letters, the country where more were written than anywhere else in Europe. The denunciation of neighbours one was jealous of has started a new era. Denunciation through social networks, the press … the courts are obliged to open an inquiry when these things are brought to their attention and the opening of an inquiry is now presented as a pre-condemnation. The madness begins,” Bayrou said.

On Tuesday, defence minister Sylvie Goulard, another high-profile MoDem minister and former MEP, said she was leaving the government to concentrate on fighting the allegations.

MoDem insists it has “respected all the rules and employer regulations” with regard to its parliamentary assistants. Nobody has been charged in the affair.

On Monday, Richard Ferrand, minister for territorial integrity and secretary general of Macron’s party, resigned over a separate nepotism scandal.

None of those who have stood down has been formally charged with any offence and all have denied wrongdoing.

The departures came as Macron’s prime minister, Édouard Philippe, prepared to announce a mini reshuffle after the legislative results. La REM needed 289 seats for a majority in the 577-seat Assemblée National and won 308. MoDem took 42 seats.