With a record number of judges marked for a probe, and other drama swirling above the judiciary, here’s a look at what it all means for the sector, and the ongoing war on corruption.

At the Area Courts and Magistrate Courts, parties to a dispute can see the presiding judge in chambers before court proceedings commence. This kind of contact takes place because these are usually courts of summary jurisdiction. But many times, misconduct takes place in this process. Judicial corruption is a cancer that begins at the lower levels and inches its way up. The National Judicial Council (NJC) on October 2 announced the setting up of 15 new panels to investigate allegations of various of acts of misconduct against 15 judicial officers in the country. 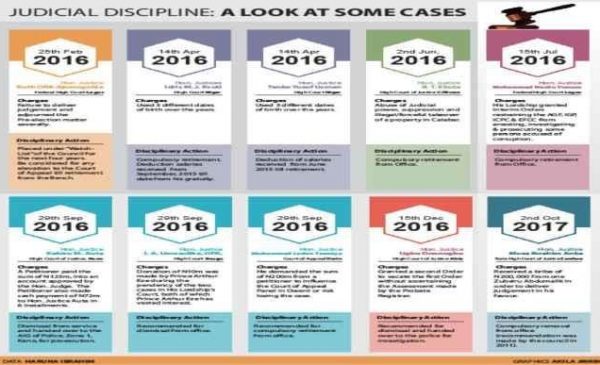 The NJC also commended the Zamfara State Government for finally implementing its recommendation to remove Justice Musa Ibrahim Anka of the Zamfara State High Court, who was indicted for receiving the sum of N200,000 bribe from one Zubairu Abdumalik in order to deliver judgement in his favour in 2011.

The removal of Justice Anka and the setting up of the 15 panels, highlights growing concerns about corruption in the country’s judiciary. On August 16, National Bureau of Statistics (NBS) and the United Nations Office for Drug and Crimes (UNODC) released reports indicting the Nigeria Police and judiciary as the most corrupt public institutions where about N400 billion is spent annually on bribes to public officials.

Their 2017 National Corruption Survey said 33 per cent of Nigerian citizens have had “bribery contact” with prosecutors and 31.5 per cent with Judges/magistrates.

The President Muhammadu Buhari administration set corruption as one of its cardinal objectives. The president had during the inauguration of then Acting Chief Justice of Nigeria (CJN), Justice Walter Onnoghen on November 11, 2016 charged him on the need for the judiciary to support the fight against corruption. Also, in February 2016 in Addis Ababa, Ethiopia while interacting with Nigerians at a town hall meeting, the president further stressed that the nation’s judiciary remained his major headache in the fight against corruption.

Though only Justices Ngwuta, Ademola and Umezulike were charged to court from the initial raid, the NJC suspended all the indicted judges from sitting. In June the NJC recalled all judges not yet arraigned, including Justice Ademola, who was acquitted by an FCT High Court.

This angered the Presidency, with the Special Assistant to the President on Prosecution, Okoi Obono-Obla, and the chairman of the Presidential Advisory Committee Against Corruption (PACAC), Prof Itse Sagay accusing the judiciary of not being on board in the fight against corruption.

This development spurred the Chief Justice of Nigeria (CJN), who presides over the NJC, to intensify efforts aimed at cleansing the judiciary from within. The latest plan to name 15 panels to investigate allegations of impropriety against judicial officers is being viewed as ‘Daniel come to judgement’ for the judiciary. Observers await the conclusion of the panels to know how many of the lot will be indicted.

The NJC statement, which was signed by the Director of Information, Soji Oye, explained that 46 petitions were received against judges, out of which a total of 29 were dismissed for being unmeritorious while the remaining two were withdrawn at the instance of the petitioners.

Oye said the council also considered worthy of further investigation, the petition by Azi A. Phillip on behalf of All Farmers Association of Nigeria (AFAN), Plateau State Chapter against Hon. Justice P. D. Damulak, the immediate past Chief Judge of Plateau State, whom he accused of bias for failure to make available his judgment in Suit No. PLD/J/236/16 delivered on 4th November, 2016.

Daily Trust spoke to anti-corruption lawyer, Festus Keyamo, who described the probe as a laudable move by the CJN, and a step in the right direction. “This will certainly go a long way in fighting corruption, not only in the judiciary, but all other sectors,” he said.

Also speaking, the executive director of Ant-Corruption and Research Based Data Initiative (ARDI), Dennis Aghanya, said the increasing scrutiny on judicial officers has now made the judiciary to sit up. “Also, the younger ones coming up will take lessons from this, thereby ensuring the new crop of professionals having a sound, corruption-free approach to doing things,” he added.