As the world marks the 2019 International Day of Girl Child, Neferok Development Initiative, NeDI, a Non-Governmental Organization has recommended education of every girl child as the weapon against oppression and failure.

With the international theme ‘Girl Force Unscripted and Unstoppable’ the event which was held recently at Ezibecks Academy had over 80 students drawn from Otu-Jeremi Secondary School and Ezibecks Academy Ovwian, in Ughelli South, Udu Local Government Areas of Delta State.

The Organizer, Ayo Okotie stated that “the vision of Neferok Development Initiative, NeDI, is a society of responsible people so in celebrating the girl child, we are trying to bring out their potentials. Over time the girl child has been scripted, stereotype and not allowed go beyond certain limits. This is wrong as the girl child is to be celebrated; they are to be given the same chance as the boy child, girls can lead, if given the chance they have what it takes to rule the world.

“Hence the addition of a sub theme ‘education her weapon against oppression and failure’ to the international theme .Education is beyond reading and writing. When you know how to take the right decision at the right time you are educated. Our girls have been educated on their rights; they now know that they can be anything they want to be. By focusing on their potentials and acquiring adequate knowledge is the only way they can be free from oppression and failure.”

Earlier on while addressing the students, Barr. Faith Benenimibo stated that if the girl child is educated, when she knows her right the future is secured. “I believe that with education, the girl child can think beyond the normal, tradition way and explore new opportunities. She can do great things; even become a pilot if she chooses to. A girl child has the ability to learn as well as a boy child.

“Do not follow or succumb to the usual pattern of male dominance. We are the new force in town, the girl child is being recognized globally, and there are laws to protect you so you can aspire to be anything. I encourage you all to dream big and achieve great things. Education is very important. Take your studies seriously and strive at every point to learn to be better version of yourself.” She said

Speaking on behalf of the teachers of Ezibecks Academy Ovwian, Esieke Ogheneruona Zillah said that a girl child is not supposed to be under servitude. “A girl child is supposed to be in school and not on the street hawking or doing house chores because when you educate a woman, you educate a nation. In order to have a voice to speak for themselves the girl child must be educated. Those being abused sexually or physically will have the boldness to speak out after hearing what they were taught today.”

Onwah Fejiro, a volunteer for Neferok Development Initiative, NeDI, stated that “this programme has opened the girls eyes to the huge benefits of education and they have promised to help close the education gap between boys and girls by being focused in their studies.

“Education is the bedrock of any nation’s development, this initiative is to cause a positive change and have positive impact on the academic performance of the girl child. ” she said.

Numa Demheden Ayiba Joy, Dufale Elohor, Difference Vivian, Edoja Favour Endurance and Esele Victory students of Otu-Jeremi Secondary School and Ezibecks Academy Ovwian, appealed that the girl child should be empowered through education. “If we continue with this no education for the girl child because she will end up in the kitchen, our country will be filled with illiterates and failures because education is the only key to success. A world without the girl child is colourless. Girls are unique and should not be seen as inferior.” 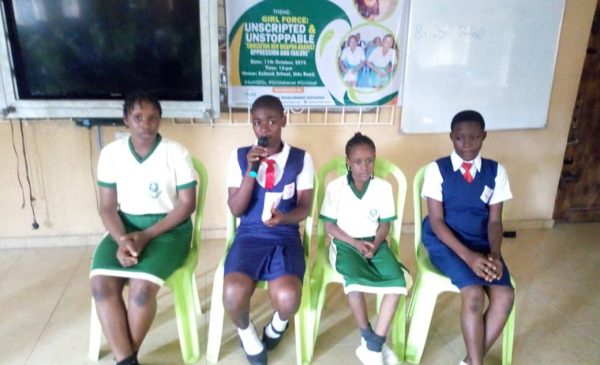