Youths of Isoko ethnic nationality in Delta State under the auspices of Isoko Development Union Youths Wing, (IDU Youths Wing) on Monday protested and barricaded the ever busy Emevor-Iyede-Ughelli Asaba Expressway over alleged marginalisation by the Delta State Government.

The mass protest by the youths which disrupted economic and official activities caused gridlock for several hours in the ever busy expressway making travellers stranded while commuters made diversions through other routes.

The protesters numbering over hundreds with placards bearing various inscriptions such as “Okowa failed to meet with Isoko Youths”, “We demand the  release of the 10million Social  Security  Fund Isoko Youths ”, “Isoko Youths  Tells Okowa to Respect Isoko Tradition ”, among others.

President of the IDU Youth wing, Comrade Obokpaino Fidelis, who led the protest stressed that the protest is as a result of the marginalisation of the IDU youth wing by the Delta State Government and the Multinationals Oil Companies operating in Isoko land.

He noted that, “Isoko Development Union,  Youths Wing was created 16months ago saddled with the responsibilities of handling all Youths activities in Isoko nation.  But since its creation till now, the State Government has resolved not to give IDU Youth Wing attention for interaction.

“We are being denied of our Corporate Social Responsibilities by the Multinationals Oil Companies operating in Isoko Land. And whenever we approached the Oil Companies for dialogue, they refused granting us audience.

“Even the Commissioner of Police,  the Army and DSS including the State Government,  they all denied having audience with us which is the major reason why we barricaded the road today in a peaceful protest over the marginalisation being done to IDU Youth Wing by the Delta State Government and the Multinationals Oil Companies.

“We the Isoko Youths are being Marginalised of the 10million naira Social Security Fund which the State Government is given to other ethnic nationalities across the State. Also we are being marginalised of the Social Corporate Responsibilities which all Oil Companies exploring Oils in Isoko land suppose to perform to our Youths, women and men.

“That’s why we are here to express our displeasure to the State Government and all Multinationals Oil Companies operating in Isoko that enough is enough,  we the Isoko Youths say no to Marginalisation. We are therefore demanding an interactive session with the State Government to present our demands to the Executive Governor of Delta State,  Senator Dr Ifeanyi Arthur Okowa.  And also with the Multinationals Oil Companies operating in Isoko land.” 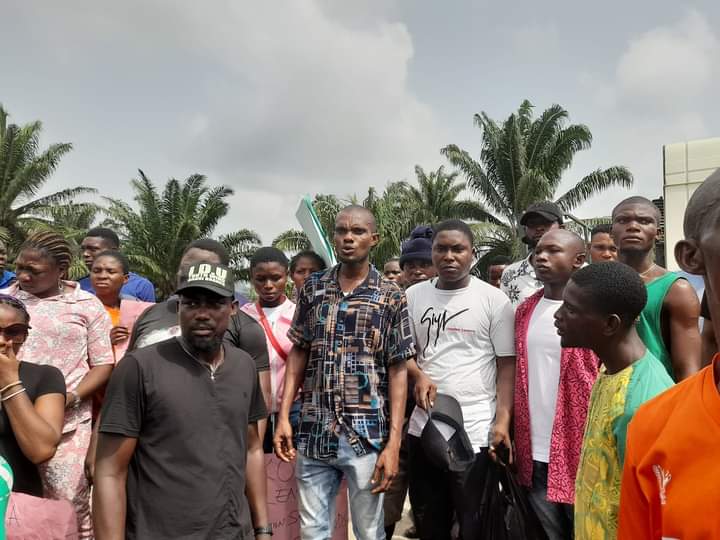 Others who corroborated the President speech,  are Comrade David Odafe Igbe, Secretary General Isoko Development Union, Youths Wing and Isoje Esther, IDU Youth Wing Women Leader. They both noted that, the Isoko Youths has been Marginalised by both the State Government and Oil Companies operating in Isoko land for too long. And this is the right time we put an end to all forms of marginalisation by both the Delta State Government and Oil Companies exploring Oil in Isoko nation.

While responding to the aggrieved protesters, the Speaker Delta State House of Assembly,  Rt Hon Sheriff Oborevwori, who met the protesters on his way to Asaba, appealed to the protesting youths to remain calm noting that the government will look into their demands and present them to State Governor for positive action.

In a related development, the coordinator of Amagbein Peace Youth Movement for Justice and Equality, Pastor Bodmas Kemepadei, who was on ground during the protest,  said, “We are here in solidarity to support the Isoko Youths to add our voices to their demands.

“We appealed to the relevant agencies and institutions saddled with the responsibilities of attending to their demands to do so without further delay. Because it will be so unfortunate that voices of our people from our region facing untold hardship has been silent by political bigwigs who did not mean well for our region.

“But I’m happy that, this people has come to out to show their strength and I believe that with what has happened,  we will achieve good result.”