The Delta State Government has applauded the Community Development Advocacy Foundation (CODAF) on its lunch of the phase 2 of ‘A Million Tree Project’ saying the project was well timed.

The Executive Assistant to the State Governor, Dr. Evelyn Aluta gave the commendation on behalf of the state government yesterday during the official flag off of the project at the Ughelli Council Secretariat, noting that in the phase of perenial flooding ravaging communities, there was no better time to flag off such project that is aimed at savaged the environment. 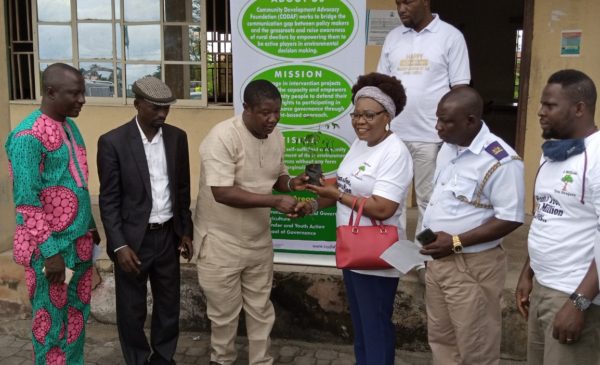 She maintained that saving the environment from destruction was a collective responsibility for all well meaning Nigerians and not just government alone, calling on Nigerians and indeed Deltans to imbibe the culture of tree planting and positive environmental consciousness.
Also speaking during the event, the Executive Chairman of Ughelli North local government area, Hon. Godwin Adode promised to provide all necessary support for CODAF/RUCEi to ensure the success of the project.
Adode who was represented at the event by the Council’s Vice Chairman, Victor Uyoh said the council will as a matter of urgency initiate a bill in the Local government Legislature that will make tree planting a compulsory requirements for any land developer
He said, “We are very happy with this project, because it is what we have been looking forward to. Tree planting has been one of our major concern in the local government and having an NGO that has  ready to embark on such project, we are ready to give them our total support. “
Earlier in his remarks, the Executive Director of CODAF, Mr. Benin Richard, said the aim of the A Million Tree Project was to improve the environment and impact life, adding that the target was to moblize one million persons to plant a tree in their domain.
According to him, “Our forest are shrinking in size and the world loses close to 3.0689 million hectares of land yearly. Nigeria’s total land area equates to 94,780,000 million hectares.Forest covers 10 percent of the total land area, with over 4,600 plant species identified, making Nigeria 11th most bio-diversed country in Africa.
“Ironically, Nigeria loses approximately 350,000 – 400,000 hectares of forest land per year which represents about four percent of forest cover. The  A Million Tree project, is a tree planting campaign to protect the environment that improve the quality of our environment and people’s livelihood.
Also speaking, the Executive Director of Africa Center For Environmental And Rural Development, ACERD, Fred Nohwo, appealed to the local government chairman to ensure that the habit of tree planting is imbibed on the people.
“If possible, politicians, corperate bodies should celebrate their birthdays
,anniversaries with tree planting, as it will reduce the stress of the ozone layer.”
Post Views: 252