Hugh Marston Hefner, American icon and founder of Playboy magazine, has died at age 91. Playboy Enterprises, Inc. announced the sad news through a statement which read: “Hugh M. Hefner, the American icon who in 1953 introduced the world to Playboy magazine and built the company into one of the most recognizable American global brands in history, peacefully passed away Wednesday, 27 September 2017, from natural causes at his home, The Playboy Mansion, surrounded by loved ones.”

Hefner was born during the Prohibition era in Chicago, Illinois, on April 9, 1926. He was the first child of Grace Caroline (née Swanson; 1895–1997) and Glenn Lucius Hefner (1896–1976), who both worked as teachers. His parents were from Nebraska. He had a younger brother, Keith (1929–2016). Hefner’s mother was of Swedish descent, and his father had German and English ancestry. Through his father’s line, Hefner stated that he was a direct descendant of Plymouth governor William Bradford. He described his family as “conservative, Midwestern, and Methodist”.

He attended Sayre Elementary School and Steinmetz College Prep, and then served from 1944 to 1946 as a U.S. Army writer for a military newspaper. Hefner graduated from the University of Illinois at Urbana–Champaign with a Bachelor of Arts in psychology and a double minor in creative writing and art. He earned his degree in two and a half years in 1949. After graduation, he took a semester of graduate courses in sociology at North-western University, but dropped out soon after.

Hefner, known to most as “Hef”, introduced America to the world of Playboy in December 1953 and ever since, it has been one of the most recognisable brands in the world. 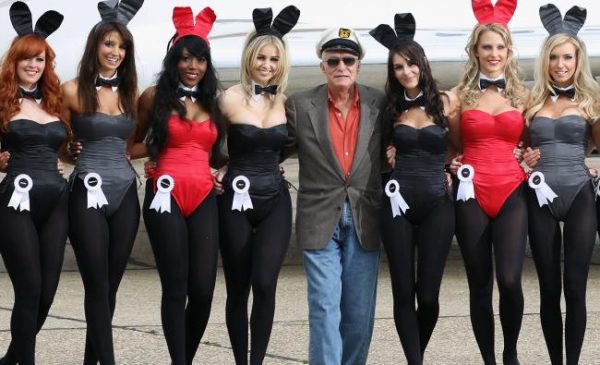 He went on to claim to Esquire in 2013 that he had bedded “over a thousand” women.

The first ever issue of Playboy featured a nude Marilyn Monroe on the cover after he raised US$8000 from friends and family to launch the magazine. It was produced in his kitchen and carried no date because he was sure the title wouldn’t make it to a second issue.

Afterwards, Hefner credited Monroe for his fame and told Vanity Fair he has reserved a crypt next to the starlet for US$75,000 at the Westwood Village Memorial Park mausoleum.

Hefner is survived by his wife Crystal, four grown children, Christie, who served as CEO of Playboy Enterprise for more than 20 years, David, Marston and Cooper, who currently serves as Chief Creative Officer at the company, Playboy said.

“There were chunks of my life when I was married,” he told Esquire.

“And when I was married, I never cheated. But I made up for it when I wasn’t married. You have to keep your hand in.”

The icon’s youngest son, who was regularly pictured with his father at his annual parties, said in a statement: “My father lived an exceptional and impactful life as a media and cultural pioneer and a leading voice behind some of the most significant social and cultural movements of our time in advocating free speech, civil rights and sexual freedom.”

Discussing Playboy’s iconic bunny logo in a 1967 interview, he said: “The rabbit, the bunny, in America has a sexual meaning; and I chose it because it’s a fresh animal, shy, vivacious, jumping — sexy.”

Hefner purchased the Playboy Mansion in 1971 where he lived until his passing.

Hefner sold the mansion to his neighbour, also the manufacturer of Twinkies, for US$200 million in June under the agreement that Hefner would be able to live there until his death.

In Hugh Hefner’s last interview with people.com before his death, he said: ‘I’m very blessed’

Throughout his time at the mansion, Hefner famously housed multiple young women known as “Playmates”. The most famous of the Girls Next Door are Hefner’s former girlfriends, Holly Madison, Bridget Marquardt and Kendra Wilkinson. The reality show, known in Australia as Girls of the Playboy Mansion, followed the lives of the Playmates and their relationships with Hefner — and more crucially, each other.

Hefner’s Playboy fortune sits at an estimated $43 million. His marriage to Crystal Harris, six decades his junior, in 2012, is his third.

“In my wildest dreams, I could not have imagined a sweeter life,” he told The Hollywood Reporter in 2011.

In a 1992 interview with the New York Times, Hefner said he was most proud “that I changed attitudes toward sex. That nice people can live together now. That I decontaminated the notion of premarital sex. That gives me great satisfaction.”

Hefner credited his strict upbringing by his Methodist parents for his complete ignorant of social conventions at the time.

“Part of the reason that I am who I am is that my Puritan roots run deep,” he told the AP in 2011. “My folks are Puritan. My folks are prohibitionists. There was no drinking in my home. No discussion of sex. And I think I saw the hurtful and hypocritical side of that from very early on.”

By the end of his life he had built a multi-million dollar empire of clubs, casinos, clothing, mansions, movies, perfumes and much more.

Hefner married model Kimberley Conrad at age 63 (she was 26)