I am sure you have never heard of me or read any of my essays in this column. I am therefore unknown to you as you were hitherto unknown to me and many other Nigerians. Yesterday, you were largely unknown. Today, you have become well known to the extent of saying your family name has become a household name. Your transformation from obscurity to visibility came to be as a result of the gruesome murder of your beloved daughter, Deborah. Yes, your beloved daughter, Debby was hounded and murdered by hounds in human form.

Last Thursday, probably about the time of Deborah’s martyrdom, I had completed my essay “And We Lost Our Humanity” and sent for publication in this column. In that essay published the next day, a Friday, I had lamented the gruesome killing of an intending military couple, Adamu Linus and Gloria Matthew.

I also drew attention to other unwarranted and painful deaths occasioned by our loss of humanity. I had submitted in that piece that we were all waiting for death by installment. I never knew that your daughter was being cudgeled as my fingers jammed the keyboards putting that essay together. It was much later in the evening of that fateful Thursday that the story of the death of Deborah came to town. She was accused of blasphemy on a class Whatsapp platform and her traducers, her classmates, who should protect her pronounced immediate fatwa on her and lynched her.

By the next day, a Friday, some of those who read my essay called or sent messages to discuss the fate of Deborah. It was weeping across the land. Condemnation trailed the dastardly act and the majority of Nigerians were united in condemning it. Altruistic religious leaders also condemned the act. The Islamic scholar Sheik Ahmed Gumi said that Prophet Mohammed was abused in his lifetime, but he never killed anybody for that. The Sultan of Sokoto who is the leader of Islam in Nigeria also condemned the barbaric act.

The hounds, not done with their dastardly act, went to town the next day to destroy and loot as has always been their character. They attacked churches, burnt down businesses owned by Southerners and even attempted marching on the Sultan’s palace, because he condemned the killing of Deborah. The hounds were let loose on the streets of Sokoto as some religious fanatics spoke and goaded them into committing more havoc against humanity. That moment of madness has elongated our long night of horror from which we are unable to wake up.

Mama Deborah, Nigerians are united with your family in grief. The outpouring of condolence messages and wholesale condemnation of the act reflect the magnitude of how the incident affected our national psyche.

The nation was evocative as we cry to God over the murder of Deborah. Yes, nobody can feel the pain and grief of Debora’s death like you do. You bore her in your womb for nine months, suffered the pains of parturition and, eventually, you must have heaved and smiled when she was born. 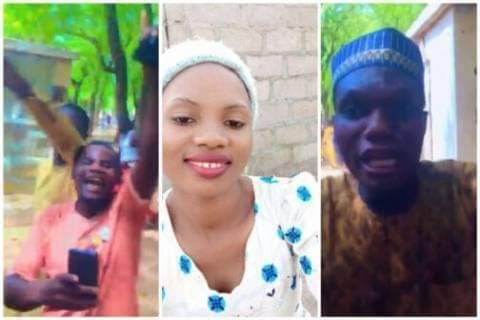 You must have been overwhelmed by joy when you carried her for the first time as a mother. Then the nurturing began. You suckled her and cleaned her and what didn’t you do to bring her up? You must have been thrilled when she began primary school. And I am sure she must have sung some of the nursery rhymes she was taught at school for you. And I bet “My mother who sat and watch my infant head…” must have been one of them. And you did watch her grow and make progress in school. She finished secondary school and like her mates she crossed over to tertiary education and became a student of the Sheuh Shagari College of Education where they killed her!

I am sorry, Mama Deborah, my recall is not to add salt to your injury. I am as much agonized as you are, just like the majority of Nigerians. Yes, Deborah became an undergraduate and she must have had her dreams of the future clothed in hope. While some of her mates saw education as a scam others ask “who school help?”. Deborah didn’t go the path of dubiety and destructive adolescent indolence. She chose education as the only legit and profitable route to her tomorrow. Mama Deborah, your daughter, Deborah, chose well.

Here then comes my appeal to you. The papers reported you as saying “None of my 7 children will go to school again.” Mama Deborah, it was not school that killed Deborah. It was Nigeria that killed her and Nigeria kills anybody whether they went to school or not. Death could have met Deborah anywhere. She could have been killed in the Abuja-Kaduna train hijacking. Death has become too commonplace in Nigeria.

Mama Deborah, do not demonize education. Let your children go to school. Education is what will liberate them and make them realize Deborah’s dreams and most significantly theirs. I know you spoke in indescribable agony and grief. It is the kind of grief and agony that torture the soul. Like everything else, the event will recede in receiving attention and Nigeria will move on. Just the family and friends will continue to feel the loss and pain.

The soul of your daughter is crying for justice and those who hounded her to death shall meet worse fate. Deborah has earned a place in martyrdom. She will be remembered, but not those who killed her. Nigerians must press for justice and ensure that her killers are brought to book. Nigeria is in dire straits and human lives no longer matter. Government makes so much noise about security and sanctity of human lives, but both are daily denigrated and attenuated. Life has become cheap in Nigeria. Two days or so after Deborah’s murder, a sound engineer who intervened in a squabble was lynched in Lagos. Armed robbers, kidnappers, bandits and terrorists are daily eliminating people. Your daughter, Deborah, was added to the interminable list of those undone by Nigeria. We cannot forget her just as we cannot forget the Buni Yadi boys, the Chibok girls and the Dapchi girl, Leah Shaibu who is still in captivity.

Mama Deborah, Nigeria stands with you. Be comforted. Our God of justice will hear your cry and intervene. Be strong and remember: “when peace like a river attend my way/when sorrows like sea billows roll/whatever my lot/thou has thought me to say/it is well….”.
Yes, Mama Deborah, it is well.
Bound to you in the humanity that we must reclaim,
Sunny.